The preamble of the newly-released CMP says that three alliance partners are committed to upholding the secular values enshrined in the Constitution. 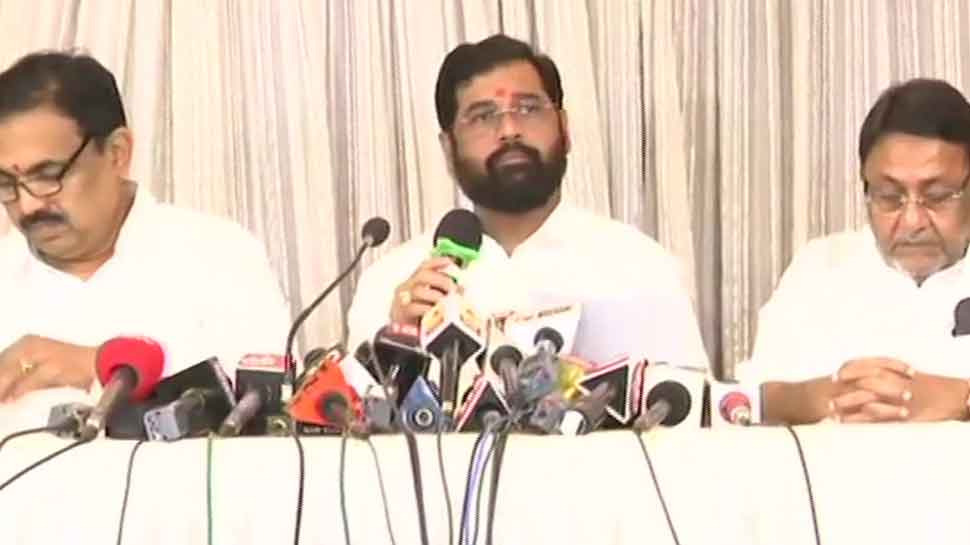 MUMBAI: The Common Minimum Program of the NCP, Congress and Shiv Sena-led alliance 'Maha Vikas Aghadi' was released on Thursday for running the coalition government in Maharashtra, which promises loan waiver for farmers, food for all for Rs 10 and 80 per cent jobs for locals.

The CMP promises immediate assistance and a loan waiver for farmers. Among other issues, the CMP promises 500 sq feet home to slum dwellers in the SRA scheme, health insurance for all, and food for all for Rs 10.

As per the CMP, the crop insurance scheme will be revised to ensure immediate compensation to the farmers who have lost their crops.

The CMP also states that appropriate measures will be taken to ensure remunerative prices for farm produce. The CMP also provides for the construction of a sustainable water supply system for the drought-affected areas.

On the issues of rising unemployment, the CMP says that the process of filling all the vacant posts in the State Government shall be initiated immediately.

Another highlight of the Common Minimum Program of 'Maha Vikas Aghadi' is that all three partners - (NCP-Congress-Shiv Sena alliance) - have dropped their core issues.

The Shiv Sena has compromised on the 'Hindutva, Savarkar and the Ram Temple' issue as there is no mention of these issues in the CMP.

The Sharad Pawar-led NCP has compromised on its 'Maratha vote bank' as it has dropped its key demand for Maratha reservation in the CMP.

The preamble of the newly-released CMP says that three alliance partners are committed to upholding the secular values enshrined in the Constitution.

On the contentious issue of national importance as well as of state importance, especially having repercussions/consequences on the secular fabric of the nation, the Shiv Sena, NCP and the Congress will take a joint view after holding consultations and arriving at a consensus.

The CMP was released during a press conference by Shiv Sena's Eknath Shinde and NCP's Jayant Patil ahead of Uddhav Thackeray's swearing-in ceremony later today. They were later joined by Congress leader Balasaheb Thorat.

Speaking on the occasion, Shiv Sena leader Eknath Shinde said, ''The Nanar Refinery Project and bullet train project will be taken up in our Cabinet meeting.''

Shinde added that the farmers are facing problems in Maharashtra and this government will do its best for the farmers. This will be a strong government.

On his turn, Jayant Patil of NCP said, ''The first cabinet meeting of our government will be held later today.''

On the issue of jobs, Shinde said that ''there will be a compulsion and a law will be enacted to ensure 80 percent reservation for locals in the existing and new companies in Maharashtra.''

He concluded by saying that women's safety will the top priority of the Maha Vikas Aghadi government in the state.