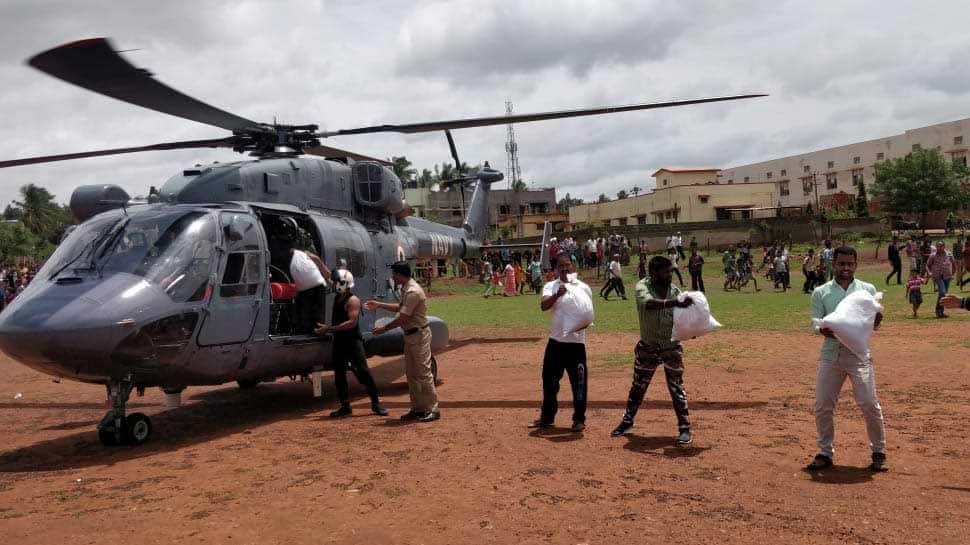 Kolhapur: Maharashtra Chief Minister Devendra Fadnavis on Saturday arrived in the flood-hit Kolhapur and Sangli to take stock of the situation and the relief and rescue operation being carried out there by various state and central government agencies.

After reviewing the situation, the Chief Minister announced an ex-gratia of Rs 5 lakh for those killed due to rain-related incidents.

He added that a team of 100 doctors is being sent to Kolhapur and Sangli. There is no lack of medicines, he assured while speaking to reporters.

The Chief Minister further informed that the Navy is sending additional teams from Vishakhapatanam, which will arrive here as Shirol area in Kolhapur is severely affected. Currently, 95 boats are operating in Sangli, he said.

Replying to a question on reports that stickers of CM and other leaders were put on flood relief material, the Chief Minister said, ''Nobody should do it, it is the work of government. There should be no need of pictures of any political party or person.''

The office of the chief minister said in a tweet, ''While the flood situation in Kolhapur continues to remain grim, additional 15 Navy teams from Visakhapatnam will reach today to join the rescue operation in Kolhapur and adjoining areas.''

Meanwhile, the Army has rescued 17,000 people from Kolhapur District so far. Police escorts were also provided for a green corridor till Sangli.

"27 people died due to floods in 5 district of Pune division in Maharashtra. More than 2 lakh people have been evacuated to safe places till now from 3 districts including Kolhapur, Sangli, and Satara," said Deepak Mhaisekar, Divisional Commissioner, Pune Division.

On Thursday, he had conducted an aerial survey of Kolhapur to review the situation.

Meanwhile, the death toll after a rescue boat capsized in Sangli river has risen to 12 and at least 8 people are still missing.