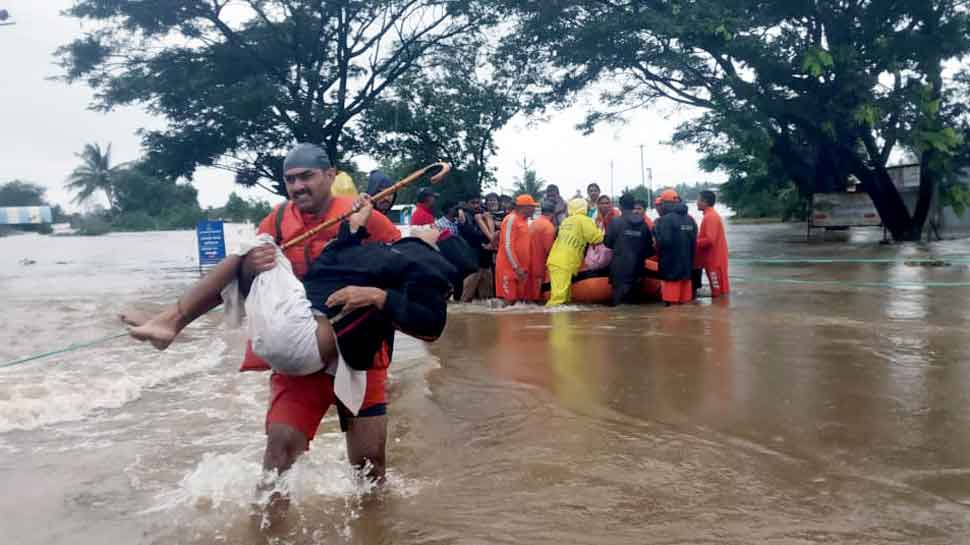 The grim situation is likely to continue for the next three days, warned the weather department.

Rescue and essential services including the state health department are working round the clock to ensure the safety of locals.

All dams of Pune, Satara Sangli and Kolhapur are 100 per cent full. All riverside villages of Pune district have been alerted.

"Reservoirs in these districts are full. If we get more rainfall, then we have no option but to release water in rivers," said Mhaiskar. Nearly 4 lakh cusecs of water was released from the Almatti dam, he added. If the flow of water increases, then a flood-like situation will be created in Raichur. “We are in touch with the authorities,” he added.

Of the 16 deaths, four were recorded in Pune, seven in Satara, two each in Sangli and Kolhapur, and one in Solapur.

Several trucks were stuck on a national highway that connects the financial capital Mumbai to information and technology hub Bangalore, because the road was submerged in few places, Mhaiskar said.

"14 Navy teams from Western Naval Command have also reached. Rescue teams from Pune and Mumbai have landed at Kolhapur and five more teams are preparing to get deployed," the CMO said.

A total of 1000 army officers have also been deployed to carry out rescue operations. "A total of 16 Columns and 12 Engineer Task Forces comprising of almost 1000 Army personnel have been employed in Belgaum, Bagalkot and Raichur district of Karnataka and Raigad, Kohlapur and Sangli district of Maharashtra to carry out flood relief operations," stated an official release from defence PRO.

The rescue operation by Army personnel is presently underway in the villages of Birwadi and Asankoli in Raigad District, Mouje Digraj, Haripur and Nandre village of Sangli and Kohlapur districts.

Meanwhile, 89 boats were also deployed to help people. Apart from this, Navy and coastal guard teams are also helping in the rescue operation.