Shiv Sena leader Aaditya Thackeray on Thursday filed his nomination papers from the Worli seat in Mumbai to contest the assembly election in Maharashtra in presence of top party leaders including his father and party chief Uddhav Thackeray. 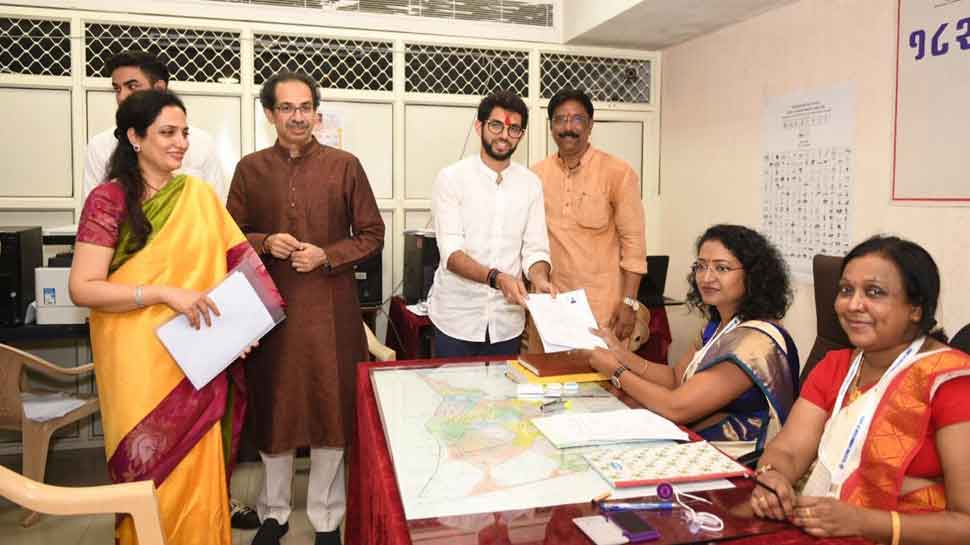 MUMBAI: Shiv Sena leader Aaditya Thackeray on Thursday filed his nomination papers from the Worli seat in Mumbai to contest the assembly election in Maharashtra in presence of top party leaders including his father and party chief Uddhav Thackeray.

Speaking to reporters, Uddhav Thackeray hoped that the voters in Mumbai will support Aditya in the upcoming poll.

''There has been a tradition of doing social service in my family. We had earlier thought of not contesting the assembly election but the times are changing now..I promise Aditya will do everything for the welfare of the people in his constituency.''

The Shiv Sena chief also confirmed that he won't contest any election in the future.

Ahead of that the Uddhav Thackeray-led Shiv Sena held a massive roadshow in Mumbai.

Before leaving his home, Aaditya Thackeray also took the blessings of his late grandfather and Shiv Sena founder Bala Saheb Thackeray. He also shared a picture of the same on his official Twitter handle.

The Thackeray junior was accompanied by his father and party chief Uddhav, mother and younger brother and most of the top Shiv Sena leaders. Aditya's roadshow passed from Lower Parel's 'Shivalaya', Shiv Sena branch, before he filled his candidature nomination form.

On his way to the office of Returning Officer to file nomination from the Worli Assembly constituency, Aaditya thanked people for their immense support.

“This is a historic step for me. As I am taking a big leap, I am not worried as all shiv sainiks are there with me,” the Sena scion said adding, ''I will do everything in my capacity for the welfare of people of Maharashtra.''

Maharashtra: Shiv Sena leader Aaditya Thackeray on his way to the office of Returning Officer to file nomination from the Worli Assembly constituency in Mumbai for the upcoming #MaharashtraAssemblyPolls pic.twitter.com/rB15SIIvax

It then reached the Election Office at the BMC Engineering Hub where Aaditya filed his nomination papers.