Shiv Sena MP Sanjay Raut was also present during the late-night meeting which took place at Pawar's residence where his daughter Supriya Sule and nephew Ajit Pawar were also present. 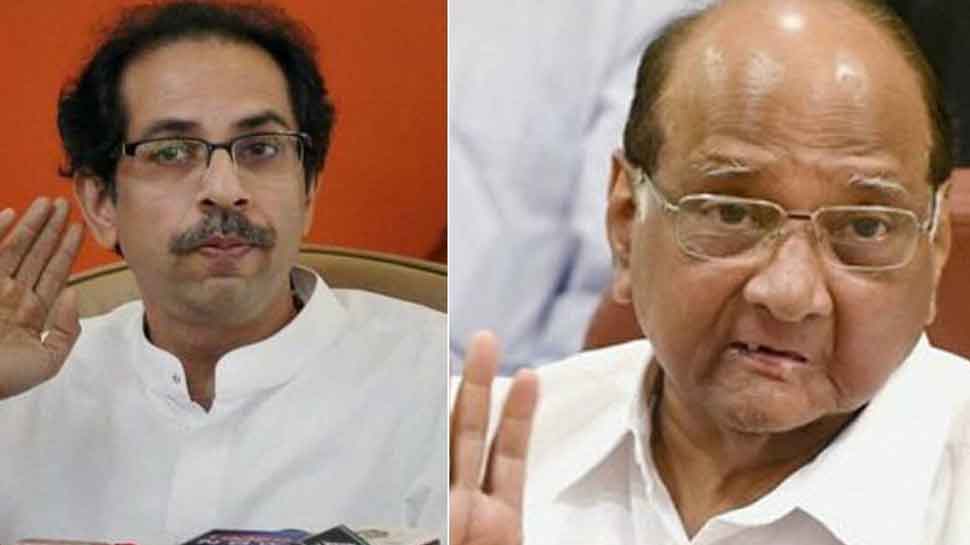 Shiv Sena MP Sanjay Raut was also present during the midnight meeting which took place at Pawar's residence which was also attended by his daughter Supriya Sule and nephew Ajit Pawar.

After emerging from the meeting no one spoke but Thackeray smiled and Raut gave the 'thumbs up' sign, indicating all was on the right track.

Though details are not available, it is learnt that Pawar briefed them on all the political development in New Delhi in the past five days, the power-sharing formula, the post of CM, Dy. CM, ministries, etc, among the three prospective partners - Sena-NCP-Congress.

Later, on Friday a series of meetings have been lined up of the Shiv Sena, Congress, later Congress-NCP and their allies and finally among the top leaders of Sena-NCP-Congress.

It's expected that the three parties' alliance - likely to be christened `Maha Vikas Aghadi` - will be formally announced and they would soon stake the claim to form the government before Governor BS Koshyari.

Senior Congress leader Prithviraj Chavan had on Thursday said that the Congress and its ally Nationalist Congress Party (NCP) have completed negotiations on all issues.

The former Maharashtra CM also said that a final decision on the architecture of alliance for government formation in the state will be taken on Friday (November 22).

"A decision will be taken on Friday on the architecture of alliance for Maharashtra government formation. When we announce the Common Minimum Programme, the power-sharing formula will be disclosed," he said.

According to Zee Media sources, Sena chief is under pressure to assume the post of Chief Minister by the NCP even as Shiv Sena is pushing Eknath Shinde for the chief ministerial position.

Also, Sena's senior leader Subhash Desai might emerge as the dark horse in the Chief Minister's race. For his part, Uddhav has maintained silence on the issue so far.

Maharashtra Pradesh Congress president Balasaheb Thorat is also speculated to become the Deputy Chief Minister of the state. Thorat is believed to be Congress High Command's choice as he has been credited with turning over the election in the party's favour despite unfavourable circumstances.

According to Zee Media sources, the portfolio allocation of the cabinet will take place between the three parties with 15 ministers each from the Shiv Sena and the NCP while Congress will get 13 ministerial berths.

It is likely that the Shiv Sena (56 seats), NCP (54) and Congress (44) alliance, which tentatively calls itself the 'Maharashtra Vikas Aghadi' (development front), which has a comfortable majority in 288-member Maharashtra Assembly, can stake the claim to form the government on Saturday (November 23).

The Congress legislative party leader is also scheduled to be elected on Friday.

However, according to sources, NCP supremo Sharad Pawar is pushing for his nephew Ajit Pawar to become chief minister in the state for 2.5 years. This demand might end up causing problems within the alliance.

For NCP, Home Ministry might be allocated to Ajit Pawar, electricity to Dilip Walse-Patil, Co-operation to Chhagan Bhujbal, irrigation to Dhananjay Munde, medical education to Jitendra Awhad, PWD to Hasan Mushrif, animal husbandry to Anil Deshmukh, Ministry of Industry, Energy and Labor to Nawab Malik and Food and Civil Supplies to Rohit Pawar.

Other than Balasaheb, Ashok Chavan, Prithviraj Chavan who is also the assembly Speaker, Yashomati Thakur, Vijay Wadettiwar, Vishwajit Kadam, Amit Deshmukh, Manikrao Thackeray, Naseem Khan and Varsha Gaikwad are some key leaders of Congress in the fray to get important portfolios.