Which markets did best from Berlin Wall's collapse? Wall Street and the BRICs, of course

A reunited Germany cemented itself as Europe`s largest economy, but an analysis of market performance suggests that the biggest winners are Wall St, flagbearer of Western capitalism, and the emerging `BRIC` economies - Brazil, India, China and Russia. 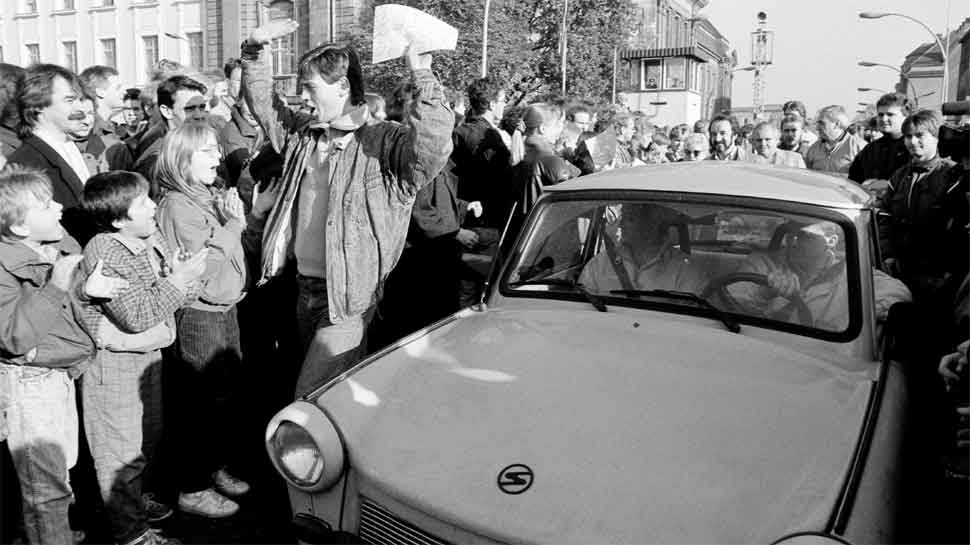 LONDON: The toppling of the Berlin Wall made free-market economics the norm across Europe - but which financial markets have done the best since then? Wall Street and the BRICs, of course. While the events of 1989 redefined Europe`s boundaries, they also ushered in almost two decades of powerful economic liberalisation and globalisation that took in China, India and Latin America - a wave that is only now cresting.

They are not the only factor, by any means. Also at work is a 30-year drop in global borrowing costs as inflation has been beaten back - even amid a boom for commodity producers, whose resources China has gobbled up.

A reunited Germany cemented itself as Europe`s largest economy, but an analysis of market performance suggests that the biggest winners are Wall St, flagbearer of Western capitalism, and the emerging `BRIC` economies - Brazil, India, China and Russia.

Since Nov. 9, 1989, the S&P 500 has surged 1,635% in value, stocks in eastern Europe`s largest economy Poland are up 550%, and Russia`s Moex has risen nearly 900% since it became firmly established in the late 90s. That compares to a 350% rise in the reunified German DAX when calculated in dollar terms, 320% in MSCI`s broadest world stocks index, and nearly 460% in its global emerging market equivalent.

"There are multiple stories here," said SEB Investment Management`s global head of asset allocation, Hans Peterson. "In combination with the growth in emerging markets when they were liberalised and when China opened up, there has been (the fall of) bond yields of course, and we have killed off inflation, more or less."

Borrowing on global capital markets has also exploded as part of the liberalisation. Data analysed by State Street Global Advisors shows that most of the $120 trillion worth of emerging market debt in the world has been issued since the fall of the Wall. Over $40 trillion of that is in China though, including $27 trillion in the last 10 years alone.

In comparison, Russia has only around $2 trillion, partly as a result of Western sanctions brought in over the last five years as relations have soured again."China is now the world`s second-largest bond market," said State Street`s Abhishek Kumar. "That is a really significant thing."

Currencies have had to ride out devaluations and various debt or financial crises. Russia`s rouble has halved in value against the dollar since Soviet times, whereas a Deutsche mark/euro amalgam is fractionally higher.

The big winner by far in economic growth terms behind the former Iron Curtain has been Poland, where GDP has ballooned by almost $600 billion. Next best have been $250 billion improvements in the Czech Republic and Romania.

In Asia, it has been overwhelmingly China, which now has an economy worth nearly $14 trillion a year. It had been gradually opening since the death of Chairman Mao in 1976, but picked up considerable speed in the 1990s, and joined the World Trade Organisation in 2001.

The question many economists and investors are now asking, however, is whether these moves may be reversing.

The U.S. and China are locked in a trade war. Relations between Western countries and Moscow have chilled rapidly since Russia`s annexation of Crimea in 2014 and accusations that it meddled in the 2016 U.S. election, which Moscow denies.

Poland is ruled by an avowedly nationalist, eurosceptic party and Hungary and Serbia have been getting closer to Russia again. In an Open Society poll published on Friday of around 12,500 citizens in Central and Eastern Europe, a majority of respondents in Slovakia (61%), Hungary (58%), Romania (58%), Bulgaria (56%), Germany (52%) and Poland (51%) believed democracy was currently under threat.

Markets have not yet taken a definitive view, but are grappling with the reality that most central banks have taken interest rates as low as they can go, and countries` growth and finances are being sapped as their populations get older.

China`s blue-chip stocks have underperformed the S&P 500 by almost 30% since the outbreak of the trade war, but Russia`s stock and bond markets are some of the best-performing this year, and many of Eastern Europe`s markets are flying too.

"I think the momentum of `89 is almost at its limits today," said Didier Saint-Georges, managing director of the 35-billion-euro asset manager Carmignac. "There is a huge rebellion against (political and economic) liberalism. It is being hugely challenged."