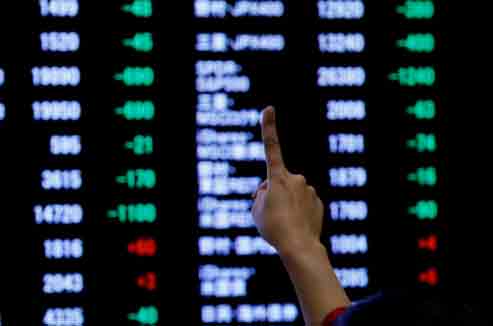 The pound nursed heavy losses due to concerns Britain could still crash out of the European Union without a trade deal in place after a transition period ending in December 2020.

Traders also await a Bank of England (BoE) policy meeting later Thursday. No change in policy is expected, but the meeting could pose further downside risks for sterling if more policymakers swing to the dovish camp and vote for an interest rate cut.

"Data has been generally supportive of an improvement in economic performance," said Shane Oliver, head of investment strategy and chief economist at AMP Capital Investors in Sydney.

"Investors can look forward to stronger growth next year, but a lot of this has already been reflected in share markets."

Traders are also monitoring a vote in the Democrat-led U.S. House of Representatives over whether to impeach Republican U.S. President Donald Trump.

However, market reaction is unlikely to be significant given it is widely expected that the Republican-controlled Senate will not vote to remove Trump from office.

US stock futures edged 0.02% lower in Asia on Thursday. The S&P 500 fell 0.04% on Wednesday, weighed by a steep drop in FedEx Corp shares after the US parcel delivery company cut its fiscal 2020 profit forecast.

Other analysts pointed to recent data releases showing economic improvements in China, the United States and Germany as reasons to be more optimistic.

In the currency market, sterling traded at $1.3087, having tumbled more than 3% from an 18-month high struck on Dec. 13 after UK
Prime Minister Boris Johnson`s Conservative Party scored a landslide victory in a general election. Against the euro, the pound stood at 84.96 pence, close to its weakest since Dec. 4.

Johnson`s government on Tuesday ruled out an extension to the December 2020 deadline for negotiations on a trade deal with the EU, creating a new Brexit cliff-edge and cutting short sterling`s post-election rally.

The focus shifts to the BoE`s policy meeting later Thursday. At its previous meeting, two of the central bank`s nine policymakers voted to cut interest rates.

British inflation remained mired at a three-year low in November, data showed on Wednesday, and uncertainty surrounding Brexit remains high, but this is unlikely to shift expectations that monetary policy will remain on hold.

However, prices are likely to be supported due to production cuts coming from the Organization of the Petroleum Exporting Countries and its allies, including Russia.