The exercise will be undertaken to ascertain if the abandoned mine is connected with the 370-foot-deep mine in which the 15 miners were trapped. 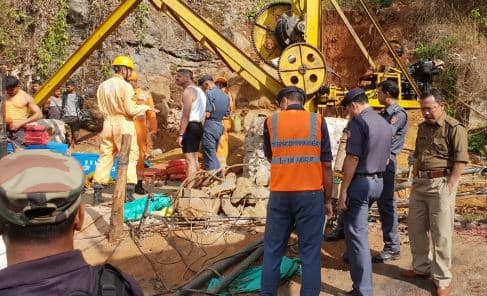 Shillong: On the 21st day of the ongoing rescue operation, the divers of Indian Navy and NDRF are preparing to enter the Meghalaya coal mine, where 15 miners are trapped, to gauge the water level.

Sharing details about the ongoing rescue operation, the officials said that efforts are on to install high-powered submersible pumps to drain out water from interconnected shafts.

According to officials, the divers will measure the water level again to take a call on resuming search and rescue operation for the trapped diggers.

Speaking to PTI, operation spokesperson R Susngi said that so far only one of the 10 pumps brought by a team from Odisha is in use in a nearby abandoned mine.

"We expect a high powered pump from Coal India be put to use later today. Till now, a lot of preparation is going on," Susngi said.

Divers from Navy and the NDRF will go inside the main shaft, where the disaster occurred on December 13, to measure afresh the water level to take a call on resuming search and rescue operation, Susngi said giving details of the operation.

The exercise will be undertaken to ascertain if the abandoned mine is connected with the 370-foot-deep mine in which the 15 miners were trapped, Susngi said.

Meanwhile, other five pumps with similar power and functions from Coal India Ltd (CIL) are on the way by road from their various centres across the country.

On Tuesday, water level had gone down by six inches in a nearby shaft but when Navy and NDRF divers went inside the main shaft they found that it was not connected with the rat-hole mine and hence water level remained unchanged to conduct the search and rescue operation.

With search and the rescue operation not making much headway, no contact has been established with the trapped miners even after 21 days of the disaster.

It is still not clear whether they have access to food or water.

Fifteen miners are trapped inside a 370-foot-deep illegal coal mine in East Jaintia Hills district since December 13 after water from a nearby river gushed in, puncturing the mine wall.

Meanwhile, the Supreme Court has agreed to hear on Thursday a plea seeking urgent steps to rescue 15 miners who have been trapped inside an illegal coal mine in Meghalaya since December 13.

The matter was mentioned on Wednesday for urgent listing before a bench comprising Chief Justice Ranjan Gogoi and Justice SK Kaul which agreed to hear the matter on Thursday.

The PIL, filed by advocate Aditya N Prasad, also sought a direction to the Centre and other authorities concerned to prepare a standard operating procedure (SOP) for rescue operations in "mines and other similar conditions".

The plea, filed through advocate Astha Sharma, sought directions to the Centre and the state to utilise the services of the technical wing of the Indian Armed Forces - the Indian Army, Indian Navy and Indian Air Force - in the operation immediately to rescue the 15 miners.