The rescue operations to trace 15 miners trapped in an abandoned Meghalaya coal mine are on for the past 19 days. 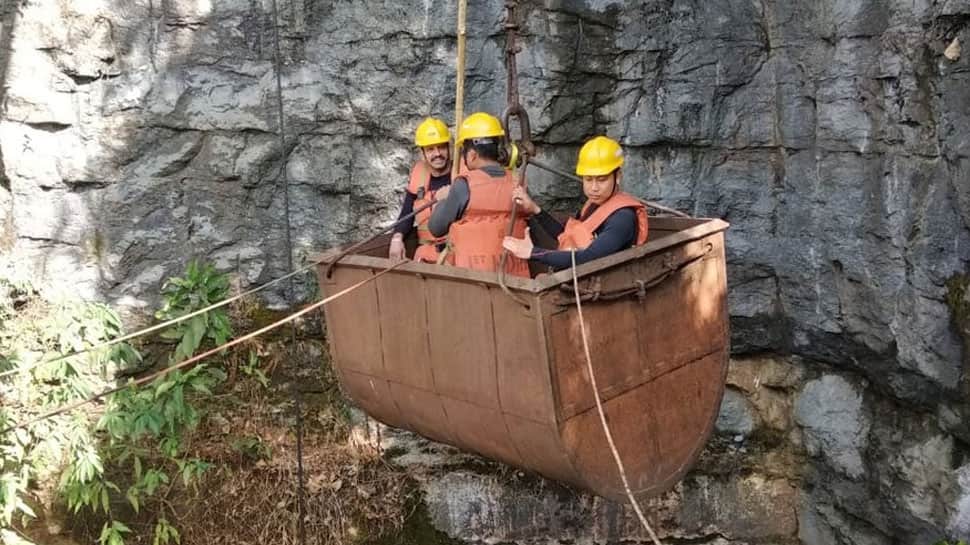 Ksan: Indian Navy divers on Monday found wooden structure, coal and a rat-hole inside the 370-feet flooded coal mine with the help of an underwater remotely-operated vehicle (UROV) machine where 15 miners are trapped for the last 19 days in this remote Meghalaya village.

"Two divers dived beneath the surface of the coal mine with UROV and found that there are some wooden structure, coal lying beneath and one rat-hole with coal at its mouth after spending three hours inside the flooded mine," said a spokesperson for the rescue operations, R Susngi.

He said none of the trapped miners were located inside the coal mine. Susngi said that visibility was very poor.

"The Navy divers said that if the level of the water could be drained out further, the search for the trapped miners will be feasible," the spokesperson said.

"At present, the site is cleared for the Odisha firefighters to start draining out the water from the main shaft where the miners are trapped. The firefighters are setting the high-capacity 100 horsepower pumps in nearby abandoned mines to enable to operate the pumps," Susngi said.

More than 200 rescuers, including 14 members of the Indian Navy, 72 NDRF rescuers, 21 Odisha firefighters, 35 Coal India Ltd officials besides a team of Meghalaya-owned State Disaster Response Force are deployed to carry out the rescue operations.

The General Manager of Coal India Ltd (Northeastern Coalfields), J.A. Borah, said one of the eight submersible pumps that drain out 500 gallons of water per minute had reached the area.

"Two more pumps will be reaching the site and another two tomorrow along with the auxiliary pipes and other materials which are not available in Jaintia Hills or Shillong," Borah said.

Mining expert and award-winning rescuer Jaswant Singh Gill lamented on the lack of coordination between the state government and rescue agencies.

"The rescue operations are very slow because of lack of coordination from the state and central agencies. In this kind of an emergency situation, we expect they should work like a machine and synchronized like a machine," Gill said.

Gill, who shot to fame after he successfully rescued 64 miners from a flooded quarry in West Bengal in 1989, hoped that the trapped miners could be "rescued alive".

In Meghalaya's capital Shillong, women Congress workers staged a protest at the Meghalaya Congress headquarters against the Conrad Sangma-led government for the "slow process" in rescuing the trapped miners.

The accident inside the illegal coal pit on December 13 was of significance, especially because the National Green Tribunal (NGT) had ordered an interim ban on "rat-hole" coal mining in the state from April 17, 2014.

Chief Minster Conrad Sangma had promised that "appropriate action will be taken at appropriate time against the people who are involved in the illegal mining and this is not acceptable to us".