Mumbai: Schools and colleges to remain shut on Monday as city braces for more rain

The Indian Meteorological Department (IMD) has warned of more “heavy to very heavy falls” in Mumbai on Monday and Tuesday. 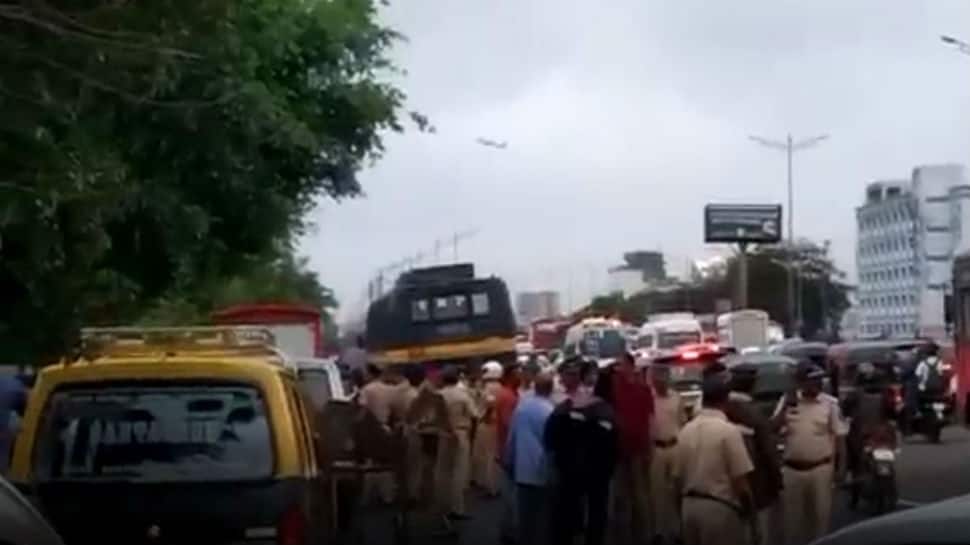 Mumbaikars continued to reel under heavy rains across the city, with several areas waterlogged. Road, rail traffic and flight operations were hit due to incessant rainfall in Mumbai even as the Indian Meteorological Department (IMD) warned of more “heavy to very heavy falls”. Waterlogging was reported from several areas like Santa Cruz, Nagpada and Sion. Adjoining areas of Thane and Palghar also remained waterlogged as heavy rains continued in the area.

The Central Railway said that rail traffic along the Harbour Line, and between Ambernath and Badlapur, were stopped in the wee hours of Sunday as the water level rose above the rail top.

A woman and a man were killed in a tragic accident when they came into contact with a live wire.

Here are the highlights from all that happened on Sunday:

News agency ANI reports that employees will be allowed to report late in government offices on Monday.

Several trains affected due to heavy rainfall/waterlogging. Trains towards Dadar, Mumbai and Panvel to be halted for 24 hours.

The state government says it has decided to keep schools and colleges shut as the Met department has predicted extremely heavy rainfall in the city.

All schools and colleges will remain close in Mumbai, Mumbai suburbs, Palghar, Thane and Raigad.

The state government has appealed to the people of Mumbai that they should leave homes only if absolutely necessary.

All emergency services will remain open.

An agitation has started on Western Highway to protest against the death of two people in Santacruz due to short-circuit.

A woman and a man have died in Mumbai's Santacruz area due to short-circuit.

IAF Mi17 returns to Santacruz airfield after relocating a total of 58 personnel, including 16 children, to safety.

The rainfall intensity is very likely to continue for the next 24 hours and decrease thereafter over Konkan and adjoining ghat areas of Madhya Maharashtra during next 2 days: IMD

Due to heavy rains, waterlogging was witnessed in several areas of Mumbai. It was further aggravated when a boulder fell in southeast ghat, leading to the following trains being short terminated/short originate/diverted.

Maharashtra Chief Minister Devendra Fadnavis on Sunday said that the government is working along with the Brihanmumbai Municipal Corporation (BMC) to minimise the problems being faced by Mumbaikars. He futher said that as per the government’s plan, eight pumping stations are needed to ease the problem Mumbai faces due to rains. He said that five such stations are already in place while three more would be set up at the earliest.

As Mumbai reels under downpour, Maharashtra Chief Minister Devendra Fadnavis on Sunday assured that the government is working along with the Brihanmumbai Municipal Corporation (BMC) to minimise the problems being faced by Mumbaikars. READ FULL STORY

Mumbai is witnessing severe traffic snarls due to intense rain. Traffic at several pivotal locations has been diverted These are:

Waterlogging at Nalasopara reported due to very heavy rainfall since Saturday night. Railway staff are present at the locations continuously monitoring the situation, Western Railway says.

Water logging at Nalasopara due to very heavy rainfall since yesterday night. Railway staff are present at the locations continiously monitoring the situation. @drmbct pic.twitter.com/oKpi6363SI

Western Railway has issued helpline numbers and contact desk numbers for information on running/ cancellation/ rescheduling of trains as Mumbaikars continue to struggle amid the heavy rainfall occurring in the city.

Passengers can contact help desks or dial the helpline numbers for information on running/ cancellation/ rescheduling of trains pic.twitter.com/MZvyDqLi7V

Due to incessant rains and release of water from Jhuj and Kelia dams in Gujarat, the water at bridge numbers 336, 358, 359 and 368 in Mumbai's Virar- Surat section has risen to danger level,

Due to incessant rains and release of water from Jhuj and Kelia dams, the water at Bridge nos 336, 358, 359 and 368 in Virar- Surat section has risen to Danger level. pic.twitter.com/7llwl7NQfn

Western Railway informed that due to waterlogging between Vasai and Virar railway stations and water flowing above danger level at railway bridge between Billimora and Navsari, 12925 Paschim Express. Also, 12471 Swaraj Express has been rescheduled to depart two hours late from scheduled time from BDTS. Futher, 19015 Saurashtra express got cancelled.

Due to heavy and continuous rain and accumulation of water in few sections, services have been suspended on Central main line and Harbour line of Central Railway suburban section at 8:00 hours as a precautionary measure to avoid hardship to commuters later.

It further said that the situation will be reviewed every hour and would be updated accordingly. Central Railway also informed services on Trans Harbour line and fourth corridor to Kharkopar are running normally.

A fresh alert from IMD says, "Rainfall to continue with gusty winds. High tide of 4.5 m plus today afternoon, and surcharged Mithi River. Avoid outing as far as possible, the sea will be rough, fisherman warnings, heavy rainfall warnings have been issued in place."

Brihanmumbai Municipal Corporation asks people to refrain from going near sea. People have also been asked to avoid areas that are waterlogged.

Due to heavy rains in Vasai-Virar area since Saturday night, the water level is 160-180 mm above rail line. According to the Western Railway, the trains between Vasai and Virar are being run on slow lines with cautious speed leading to delay of 15-20 minutes.

It is expected to rain heavily in Mumbai over the next 24 hours. Several underpasses in areas like Andheri, Santa Cruz and Sion are waterlogged. Fishermen and other Mumbaikars have been asked to not go near sea.

Services on all four lines between Sion and Kurla suspended since 7.20 am due to water logging and heavy rains.

Subways in areas like Andheri, Malad, Vile Parle and Sion are waterlogged.

High tide is expected today at 2.23 pm. Sunday is likely to see high tide at 4.83 metre. Government authorities have been put on high alert.