Season's highest tide of around 4.9 meters washed ashore around 15 metric ton of trash on the shores of Marine Line on Saturday. 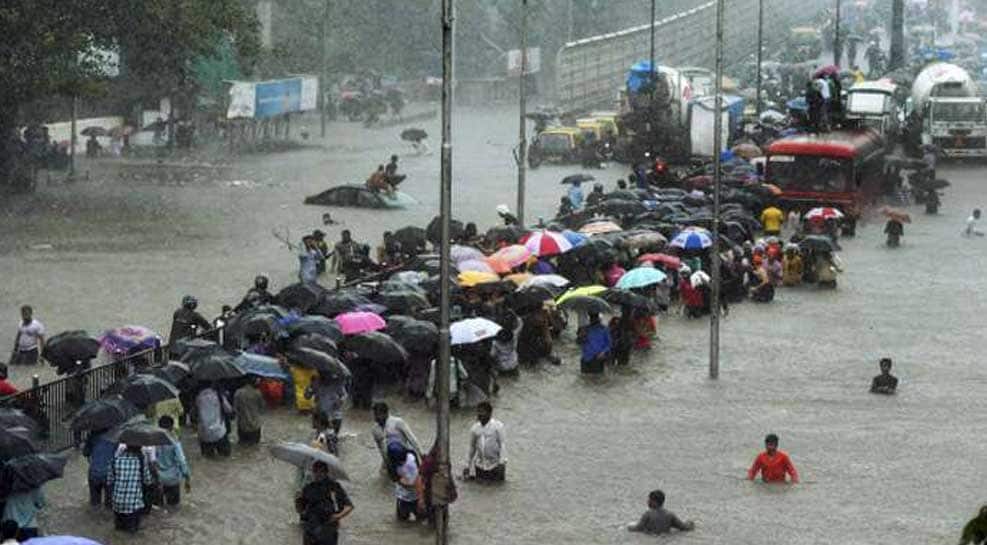 Mumbai: Season's highest tide of around 4.9 meters washed ashore around 15 metric ton of trash on the shores of Marine Line on Saturday.

After season's highest tide, the Brihanmumbai Municipal Corporation (BMC) collected a large amount of garbage on Saturday from the seashores. Around 55 labourers, two large compactors, three dumpers, one JCB, three mini compactors were deployed in order to clear the garbage from the shores today.

BMC in a tweet informed about the high tide and weather in the city today. "As per the Indian Meteorological Department (IMD), there is a warning of heavy rainfall today along with a high tide of 4.90 meters at 1.44 PM We appeal citizens to avoid venturing near the sea or walking in waterlogged areas. In any emergency call us on 1916," BMC tweeted on Saturday morning.

The weather forecasting agency, IMD observed that the impact of extensive rainfall was developed more towards suburbs, Thane and Navi Mumbai areas in the last 24 hours.

Similarly, streets were inundated and houses submerged, after heavy rainfall in the Palghar town.

Four college girls drowned in a raging waterfall in Navi Mumbai on Saturday as entire coastal Maharashtra experienced torrential rains and the region went on a high alert for the next 72 hours.

The details of another victim, Neha Ashok Jain, who hailed from Chembur were not known.

According to Senior Inspector Pradeep Tidar of Kharghar Police Station, the bodies of two girls, Arti Naik and Neha Dama have been recovered and a massive search is on to trace the other two victims.

A huge 78-metre long and 1,478 tonne cargo ship from Hazira, Gujarat, went adrift owing to heavy rains and was washed on the rocky shores of Vangaon village in Palghar early on Saturday.

Mumbai, which has been experiencing virtually incessant rains since 10 days, witnessed a fresh spell of heavy downpour since midnight, with many low-lying areas in the city and suburbs, subways and arterial roads submerged under three-four feet of water, severely disrupting traffic.

Subways in Dahisar, Kandivali, Malad, Andheri, Santacruz were flooded, stopping traffic movement in the east-west directions, and many vehicles and two-wheelers were stranded in the floodwaters.

Suburban trains on both the Western Railway and Central Railway were running at reduced speeds owing to water-logging on the tracks in the suburbs, leading to delays of 20-30 minutes.

On Saturday afternoon, with the combined effect of a 4.90 metre high tide in the Arabian Sea, continuing rains and water-logging, the railway tracks were flooded for around three hours on the Central Railway, with services suspended.

However, most flights were operating at the Chhatrapati Shivaji Maharaj International Airport with delays of around 30 minutes, according to officials.

In view of the continuing downpour, a majority of the schools and colleges in Mumbai, Thane, Raigad, and Ratnagiri have declared a precautionary holiday to avoid inconveniencing students, said School Education Minister Ashish Shelar.

In the past 24 hours, Mumbai city recorded 53.6 mm rain while Mumbai suburbs notched 133.1 mm rain and the India Meteorological Department (IMD) has forecast heavy rain for the metropolis and coastal districts for the next 72 hours.

The IMD added that Bhira and Roha in Raigad recorded the highest - 33 cms and 29 cms rainfall -- with the hill station of Mahabaleshwar following closely as it was lashed by 28 cms of rain in the past 24 hours.

The BMC Disaster Control had issued warnings to people not to venture near the beaches as a very high tide of 4.90 metres will occur at 1.44 p.m. and keep away from all seafronts for the next two days as extremely heavy rains are forecast.

Temporary arrangements have been made in several schools and public institutions to shelter stranded commuters tonight in case they are unable to reach their homes.

Elsewhere, many parts of Maharashtra also received a good amount of rainfall, including the parched regions of Marathwada.

Most big and small rivers, dams, lakes, reservoirs, ponds and wells in many regions of Konkan, North Maharashtra, Western Maharashtra, Vidarbha were either overflowing or flooded, bringing cheers to the farmers.