The flood situation remained critical in Assam, which was visited by Union Home Minister Rajnath Singh on Saturday. 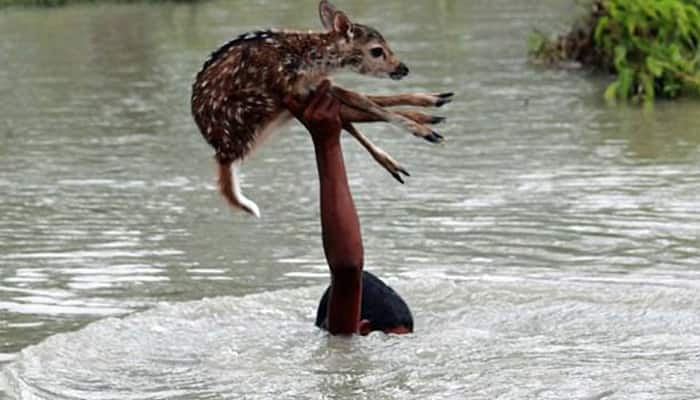 Guwahati: Its definitely a major goof up.

The Assam government on Saturday included a two-year old world-famous photograph of Bangladesh's Noakhali flood in its interim report on floods to Union Home Minister Rajnath Singh, who was on a day-long visit to the state.

The report was handed over by Assam Chief Minister Sarbananda Sonowal to the HM who was there to survey the flood condition in the state.

The report comprised of nine photographs.

Out of this, one turned out to be the famous picture of Noakhali flood, where a young boy rescues and carries a baby deer amidst water.

The photo has been taken by wildlife photographer Hasibul Wahab. It was given by Caters News Agency in February 2014 and was said to have got global appreciation at that time.

In the picture, the boy named Belal and in his 20s risked his life to rescue the baby deer.

Flood waters reaching his eyes can be seen in the photo.

"It is a big mistake. We accept it. Actually some DCs have forwarded this to us because of similarity with situation in Kaziranga National Park," a senior official said on condition of anonymity, as per PTI.

Another official said residents in and around Kaziranga have been rescuing animals during current wave of flood and this might have 'misled' officials to include the picture.

Meanwhile, Singh, said that the flood situation in Assam was "grave and challenging", even as the deluge claimed 26 lives and affected nearly 37 lakh people.

Singh, flanked by Chief Minister Sarbananda Sonowal and DoNER Minister Jitendra Singh among others, added that the state already has Rs 620 crore and the Centre will provide more funds if need arose.

"I did not imagine that the situation is so grave. I have spoken to the Chief Minister and his officials. The problem is a big challenge," the Home Minister said at a press conference after undertaking an aerial view of some places in the state.

On the other hand,  Singh, who visited a relief camp in Morigaon district and made an aerial survey, praised the state government for its efforts in handling the problem.