Earth getting greener due to carbon dioxide fertilization- Watch

A new study has revealed the Earth is getting significant greening over the last 35 years and it is mainly due to rising levels of atmospheric carbon dioxide (CO2). 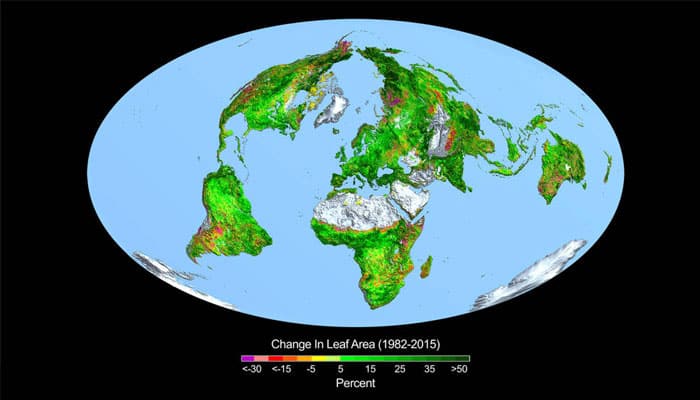 New York: A new study has revealed the Earth is getting significant greening over the last 35 years and it is mainly due to rising levels of atmospheric carbon dioxide (CO2).

Studies have shown that a quarter to half of the Earth's vegetated land are now showing signs of increased leaf cover, with the majority caused by extra carbon dioxide in the atmosphere.

Green leaves use energy from sunlight through photosynthesis to chemically combine carbon dioxide drawn in from the air with water and nutrients tapped from the ground to produce sugars, which are the main source of food, fibre and fuel for life on Earth.

According to the study, the increased concentrations of carbon dioxide increase photosynthesis, spurring plant growth,

Well, CO2 fertilisation is not the only cause of increased plant growth as nitrogen, land cover change and climate change by way of global temperature, precipitation and sunlight changes also contributed in making the Earth getting greener.

In order to determine the extent of carbon dioxide's contribution, the researchers have ran the data for carbon dioxide and each of the other variables in isolation through several computer models that mimic the plant growth observed in the satellite data.

Results showed that carbon dioxide fertilisation explains 70 percent of the greening effect, said co-author Ranga Myneni, professor at Boston University in the US.

"The second most important driver is nitrogen, at nine percent. So we see what an outsized role CO2 plays in this process," Myneni noted.

The findings were published in the journal Nature Climate Change on April 25.

An international team of 32 authors from 24 institutions in eight countries led the effort, which involved using satellite data from NASA's Moderate Resolution Imaging Spectrometer and the US National Oceanic and Atmospheric Administration's Advanced Very High Resolution Radiometer instruments to help determine the leaf area index, or amount of leaf cover, over the planet's vegetated regions.

The extent of the greening over the past 35 years "has the ability to fundamentally change the cycling of water and carbon in the climate system," lead author Zaichun Zhu from Peking University in China noted.

This is how defaunation leads to carbon imbalance in tropical forests