Indonesia has double the deforestation rate in Brazil and has become the largest destroyer of forests housing some of the world`s most endangered species. 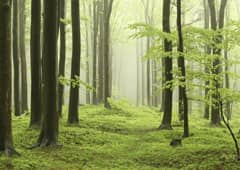 Jakarta: Indonesia has double the deforestation rate in Brazil and has become the largest destroyer of forests housing some of the world`s most endangered species.

A report, recently published in the Nature Climate Change magazine, revealed that the Indonesian archipelago lost almost twice the forest area (840,000 hectares) than Brazil (460,000 hectares) by 2012.

Researcher Belinda Arunarwati Margono, one of the authors of the study, told Efe news agency that the biggest concern was the alarming rate of tree removal in primary forests, the untouched areas where many animals on the verge of extinction such as tigers, Asian rhinoceros and orangutans live.
Although the Indonesian government approved a moratorium in 2011 aimed at limiting the removal of native forests, in fact it only concerned intact forests, leaving others unprotected, Margono said.

"So we have divided the forests in two classes in our study: those which have never been disturbed and those which at some point have suffered disruption due to human activity," she said.

Margono revealed that the moratorium was responsible for 98 percent of the loss of primary forests in the unprotected category, causing a significant loss of the habitat of endangered species and releasing enormous amounts of carbon dioxide into the atmosphere.

The study, titled "Primary Forest Cover Loss in Indonesia Over 2000-2012", was conducted by a group of researchers from the US University of Maryland and the World Resource Institute with data from the Indonesian forestry ministry.

According to the researchers, since last century, Indonesia has lost at least 15.79 million hectares of forest land, equal to one-third of peninsular Spain in size.
During these years, deforestation declined at an annual average rate of 113,800 hectares in the Brazilian Amazon region, while in Indonesia it increased by 47,600 hectares yearly, in order to cover the needs of the thriving paper and palm oil industries.

Margono said the result of the study conducted in islands such as Sumatra, where 70 percent of the forests have been altered or cut down, should serve as a warning to other parts of the country with less degradation.

"Sumatra is what other islands will become in future, if intensive use of forests continues. If no action is taken, Kalimantan (Borneo) and Papua could have the same fate," said the researcher.

Margono, a renowned expert in the field of deforestation, compiled information from the Indonesian forestry ministry for seven years.

Her efforts to create a statistical base for future forest policies received the support of Joko Widodo, a frontrunner in this year`s presidential election who has been declared the winner by most surveys.

"Right now we do not have any plan to conserve the forests, so we have an overlap of diverse data", Jokowi, as Widodo is known popularly, said in a television debate.

Margono and her team believe that if Jokowi is finally declared the winner when the final vote tally is announced later this month, he can address the problem with better data in his hands.

After the Amazon and Congo, Indonesia boasts the largest tropical forests in the world, which include 10 percent of all the plants of the planet, 12 percent of mammals, 17 percent of birds and 16 percent of amphibians and reptiles.

At the same time, the country is the world`s largest producer of palm oil and one of the major producers of paper and wood, industries which, along with tree-felling, make Indonesia the third largest emitter of carbon dioxide.