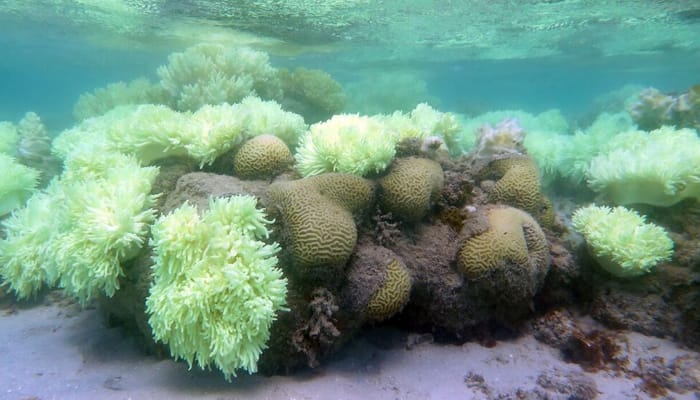 New Delhi: Ocean's corals, world's greatest heritage, are able to effectively record the events of human history, according to a latest Canadian study.

As the skeleton of the corals are made up of calcium, they have a tendency to absorb additional calcium out of the water to build their skeleton. During this process they form growth bands just like rings of tree, that can be used to track the history.

Seawater also contains metal pollutants like lead and mercury that can take place of calcium in coral skeletons.

A team of scientists, led by Ruoyu Sun, a geochemist at Trent University have found that corals in South China sea is record keeper of many historical events ranging from World War II to Opium War.

For the study, published in the journal Environmental Science, the team extracted a 200 year-old core from a Porites lutea coral in the South China Sea, expecting the record to match those gathered from remote ice and peat samples: a gradual increase over time due to mining, coal combustion and later industrial production from the nineteenth century onwards.

However, the record they found was very different. In the oldest parts of the core, dating from between 1800 and 1830, levels of mercury were low and relatively constant.

From 1830 to the beginning of the twenty-first century, the amount of mercury incorporated into the skeleton repeatedly spiked - sometimes reaching concentrations four to 12 times higher than the baseline.

By analyzing these spikes further, the team were surprised to discover that they lined up precisely with a number of violent conflicts that took place in nearby China, specifically the First Opium War (1839-1842), Second Opium War (1856-1860) and the Second Sino-Japanese War/Second World War (1937-1945). The baseline also went up throughout the 1900s, probably due to increasing industrialization, but was dwarfed by the wartime spikes.

(With inputs from Phys.Org)