Penguin numbers on the rise as glaciers retreat: Report 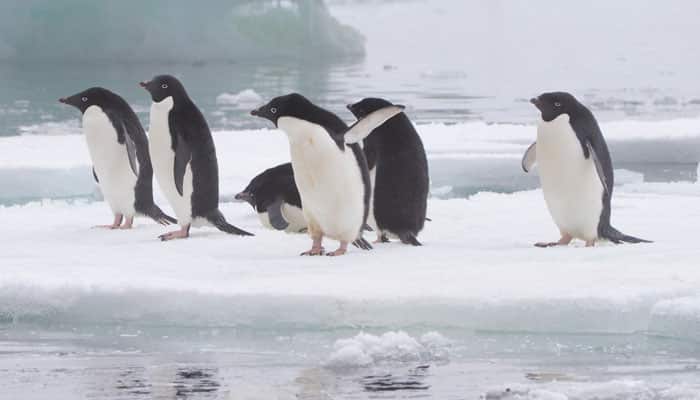 The findings show that in the last 14,000 years, the population of Adelie penguins has seen a 135-fold increase as additional breeding sites become exposed by retreating glaciers.

This population explosion suggests that current environmental conditions are more favourable for Adelie penguins than they were at the end of the last ice age.

"Shrinking glaciers appear to have been a key driver of population change over millennia for Adelie penguins in East Antarctica,” said lead study author Jane Younger from University of Tasmania in Australia.

Examining these birds' responses to past climate change means we can begin to predict how well Adelie penguins will respond in the future, he added.

Up to now, research has focused on short-term changes in terms of years or decades, but the climate change that is underway right now is likely to have effects over thousands of years.

However, despite the huge increase in penguin numbers, research shows that the effects of climate change are not uniform.

Large regional variability means geographically distant populations of Adelie penguins will experience different environmental impacts and the authors warn that in some parts of Antarctica, the number of Adelie penguins is actually in decline.

East Antarctica is currently home to 30 percent of the global population of Adelie penguins, with an estimated abundance of 1.14 million breeding pairs.

As climate change progresses, glaciers and ice sheets in Antarctica are expected to retreat further.

Adelie penguins are sensitive to changes in sea ice, the timing of sea ice retreat and the extent of glaciation because they form breeding colonies on ice-free land along the Antarctic coastline and forage in the pack ice zone during the breeding season.

An increase in sea ice can be detrimental to the birds, as adults have to forage for longer, reducing the frequency at which they can feed their chicks.

"Adequate food supplies must be available to sustain an expanding population of Adelie penguins,” Younger pointed out.

The paper was published in the open access journal BMC Evolutionary Biology.