The Solar Impulse 2, world's largest solar-powered aircraft on Monday succesfully took off from Seville in Spain for Cairo, Egypt. 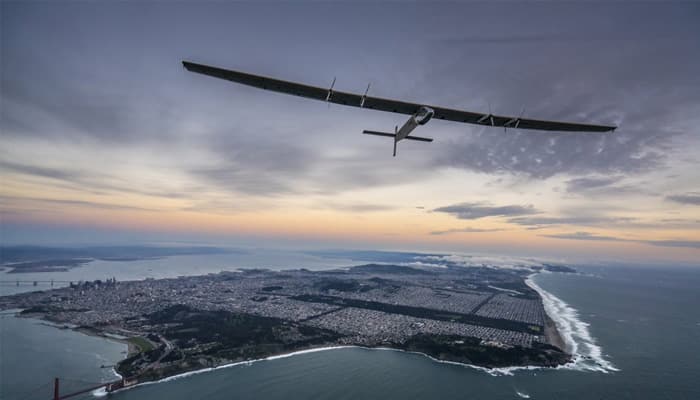 Madrid: The Solar Impulse 2, world's largest solar-powered aircraft on Monday succesfully took off from Seville in Spain for Cairo, Egypt.

The solar plane reached Seville on June 23, 2016 and will reach Egypt within 48 to 72 hours after flying over a number of airspaces, including Tunisia, Algeria, Malta, Italy and Greece.

After intense preparations, Pilot Andre Borschberg communicated with the control tower just after 6 a.m. and was given confirmation he could take off and continue the aircraft's round-the-world journey, as reported in Efe.

Before taking off, Borschberg appeared before the media at the foot of the plane to express his hopes to continue "without disappointing the world because we cannot disappoint everyone who sees us and follows us", referring to both the international press and the thousands of people following the mission on social networks.

Around 1,000 people are connected to the live-streaming app 'Periscope' to follow the event and

most of them can interact with the pilot during flight throughout many phases of the journey.

Every day, due to cameras installed in the plane's cockpit and wings, thousands of followers can track the aircraft's journey, monitored in real time by a team of engineers at the mission control centre in Monaco.

The single-seater aircraft, which is made of carbon fibre, can maintain a cruise speed of between 45 and 55 miles per hour, and reach a maximum flying attitude of 8,500 metres.

Starting the journey in March 2015, Solar Impulse has moved rapidly around the Earth since renewing its challenge in Hawaii on April 21.

In 2015, the plane flew eight stages from Abu Dhabi to Kalaeloa, including a remarkable four-day, 21-hour leg over the western Pacific -- the longest solo flight in aviation history in terms of the time it took.

But it was damage to its batteries on that stage that forced Solar Impulse to then lay up for 10 months, for repairs and to wait for optimum daylight length in the northern hemisphere to return.

BREAKING @andreborschberg has taken off for his last flight, from #Seville to #Cairo, & will fly for #futureisclean! pic.twitter.com/MebE8z5gJp