Bangalore blast case: As it happened on Monday 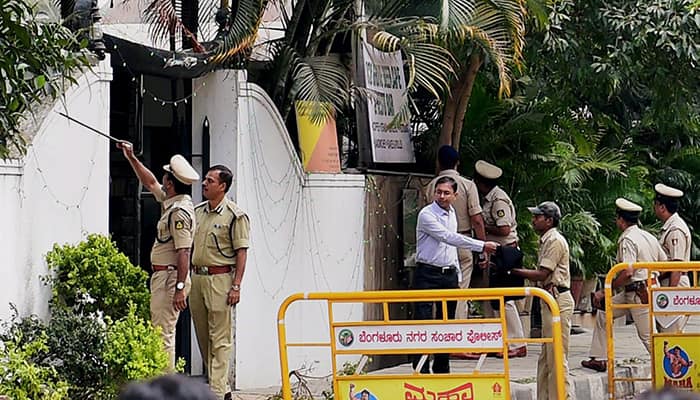 8:30 pm: Bangalore is closer to the US than any other city in India. There are many American companies in Bangalore while many others outsource their work to companies based in Bangalore: MHA official.

8:30 pm: Terror groups are repeatedly targeting Bangalore as it gives them instant publicity globally and acts to thwart foreign investment there, says Ministry of Home Affairs.

Also Read: Presence of US cos seem to be attracting terrorists to Bangalore

8:20 pm: Investigation under State police,waiting for final outcome of police, if necessary,NIA will take over, says Kiren Rijiju, MoS Home.

6:55 pm: We are looking at whether there is any involvement of these people in this particular incident: MN Reddi, Bangalore Police Commissioner

6:50 pm: We are coordinating with all state and Central forces: MN Reddi, Bangalore Police Commissioner

6:48 pm: There are teams that have come from Chennai and NIA: MN Reddi, Bangalore Police Commissioner

6:45 pm: It has been decided to offer a reward of Rs 10 lakh to any individual who gives credible info to police: MN Reddi, Bangalore Police Commissioner

6:15 pm: Meanwhile, the Bangalore Police asked people not to pay heed to rumours.

BCP is aware about the tweets of LatestAbdul. They r being examined. There is NO reason to be alarmed. Please donot pay heed to rumours.

4: 30 pm: Central teams comprising investigators and explosive experts are being dispatched to visit Bangalore from Delhi and Hyderabad and they would join the local police in the blast probe.

2:45 pm: Union Home Minister Rajnath Singh has said that the Centre has suggested to states that CCTV cameras should be installed at public places in Bangalore and other main cities.

2:30 pm: According to IB, terrorists have learnt making bombs from al Qaeda websites.

2:30 pm: The absonding SIMI terrorists were last spotted in Hospet, Bellary and Bangalore.

2:29 pm: The MHA discussed and analysed Bijnore, Pune, Chennai blasts that were similar to the Sunday's blast near an eatery in Bangalore's Church Road.

2:28 pm: Sources say that the MHA has discussed 5 SIMI terrorists who are absconding.

2:11 pm: We will enhance and strengthen security in central Bangalore both in general and in view of New Year: MN Reddi, Bangalore Police Commissioner

2:11 pm: Investigation is going on, we are hoping that teams are successful: MN Reddi, Bangalore Police Commissioner

1:11 pm: Definitely, it is a terror attack: MoS for Home Affairs​ Kiren Rijiju

1:10 pm: The low-intensity blast in Bangalore is a "terror attack" possibly carried out by SIMI: MoS for Home Affairs Kiren Rijiju

1:00 pm: Bangalore police has advanced time to end New Year celebrations from 2am to 1am in the wake of Sunday's blast.

12:55 pm: If required, Bangalore blast case could be handed over to the National Investigation Agency (NIA): MHA Rajnath Singh

The Centre is waiting for the details from the state. If needed the case could be handed over to the NIA: HM

12:53 pm: Singh informed the media that the Intelligence Agencies are working on this case.

HM informs the media that the intelligence agencies are working on this case.

12:50 pm: Rajnath Singh has said that the Centre is waiting for details about the incident from the State Government.

10:45 am: Union Ministers Sadananda Gowda and Ananth Kumar to meet Home Minister Rajnath Singh at 11 am

The blast had occurred around 8.30 pm, yesterday, near Coconut Grove, a famous restaurant on Church Street, close to Brigade Road in the heart of the city. The entire area is the most popular hangout zone in the tech city, especially on weekends.

Initial investigations suggest that it was a low-intensity explosion triggered by an Improvised Explosive Device (IED).

The dead woman was later identified as 37-year-old Bhavani. A native Chennai, she was on a visist to the city. The injured man, Karthik, is her relative.

Chief Minister Siddaramaiah said the government would provide a compensation of Rs 5 lakh to the family of the woman and said best treatment would be provided to the injured.

In serial blasts caused by IED at nine places in 2008, two persons were killed and 20 others injured.

Two bombs exploded outside the cricket stadium hours before an IPL match, leaving 15 persons injured in 2010. A third bomb was defused.

In 2013, a bomb blast outside the state BJP headquarters in the crowded Malleshwaram area just ahead of the Assembly polls had left 16 persons injured.

Zee Top 10: Aftab Will Be Under 24 Hours CCTV Surveillance In Tihar Jail In Shraddha Murder Case