Burdwan blast: IEDs made by Jamaat-ul-Mujahideen were for use in Bangladesh, says NIA

The National Investigation Agency (NIA) sleuths probing the Burdwan blast on Friday took custody of the three arrested in the case and reiterated that all of them were operatives of the terror group Jamaat-ul-Mujahideen Bangladesh (JMB). 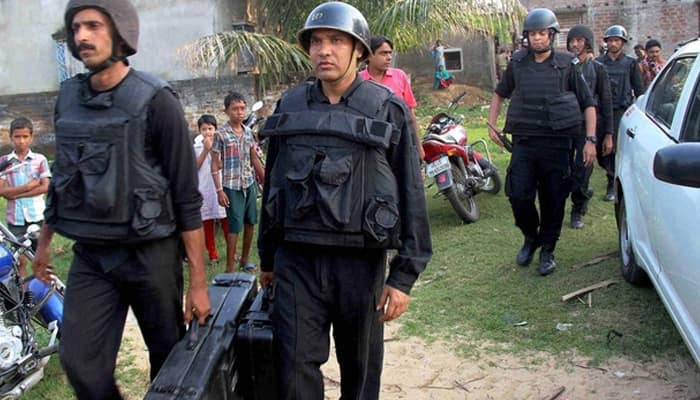 New Delhi: The National Investigation Agency (NIA) sleuths probing the Burdwan blast on Friday took custody of the three arrested in the case and reiterated that all of them were operatives of the terror group Jamaat-ul-Mujahideen Bangladesh (JMB).

The NIA today took custody of the two women accused — Razia Bibi and Alima Bibi — who were arrested on October 13 and sent them to judicial custody.

The statement by NIA also informed that the their accused Badre-Alam was in police custody.

The fourth accused, Abdul Hakim, is in hospital in judicial custody, the NIA statement said and added that it is focussing on the activities of JMB covering all aspects including the funding of terror activities.

NIA said it is also considering announcement of cash rewards for any information leading to the arrest of the absconding accused of this case who include JMB members from Bangladesh.

All the accused and their associates were members of the Bangladeshi terror outfit and were preparing IEDs to be transported to Bangladesh for possible terror attack there.

Earlier today, NIA Director General Sharad Kumar had taken stock of the progress in the investigations made in the case.

He visited a house at Mathpara on Badsahi Road in Burdwan where 40 improvised hand grenades were found.

The NIA Director-General also visited the house which one of the suspected dead terrorists Shakil had rented in Beldanga in Murshidabad.

He also went to 'Burqa Ghar', apparently a burqa making unit run by Ahmed but suspected to have been used by him as a place to meet other accused persons.

The visit of the NIA DG to Burdwan town came two weeks after the agency took over investigations into the blast at Khagragarh on October 2.

"I have come to Kolkata to review the investigation into the case. I visited Burdwan and Murshidabad. I had a detailed discussion with my officers. We have evolved strategies regarding arrests of absconding accused persons. I can't reveal anything because it will affect the investigation," Kumar told reporters on his return to Kolkata after visiting Burdwan and Murshidabad.

NIA investigators during a search operation jointly with the Burdwan district police found Improvised Explosive Devices from this house belonging to Rezaul Karim.

Three persons, including two women - one of them the widow of a suspected terrorist who died in the blast - were arrested and interrogated by the NIA.

The NIA chief later left for Beldanga in Murshidabad district and visited the house which one of the suspected dead terrorists Shakil had rented.

He also visited 'Burqa Ghar', apparently a burqa making unit run by Ahmed but suspected to have been used by him as a place to meet other accused persons.

The NIA team during its investigation over the last few days seized a large number of books and documents, 12 trunks and a car from a madrasa in Burdwan district where the Khagragarh blast accused were suspected to have been radicalised in Jihadi ideology.

NIA officers had a few days back with the help of the NSG team detonated the improvised hand grenades, which they had found during investigations.