Cold conditions prevailed in north India on Saturday with mercury in mountainous regions hovering several notches below normal even as fog caused cancellation of 45 trains and delay of at least 14 others. 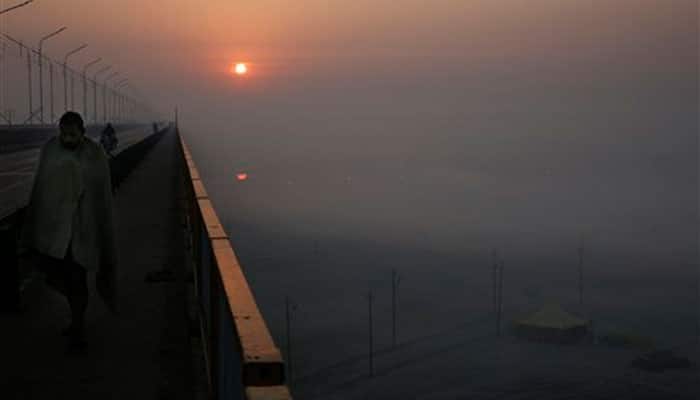 New Delhi: Cold conditions prevailed in north India on Saturday with mercury in mountainous regions hovering several notches below normal even as fog caused cancellation of 45 trains and delay of at least 14 others.

The national capital experienced a cold day with the minimum temperature being recorded at 11.4 degrees Celsius, four notches above normal, while the maximum was registered at 17.2 degrees, three notches below the season's average.

Shallow foggy conditions were witnessed in the morning which led to the cancellation of 45 trains and delayed 14 others.

In Himachal Pradesh, temperatures stayed two to four degrees below normal, even as the region witnessed clear skies in the morning which turned partially cloudy as the day progressed and strong icy winds lashed the mid and higher hills.

Keylong was coldest in the region with a low of minus 4.6 degrees Celsius, while Manali and Kalpa recorded minimum temperatures of minus 2.6 degrees and minus 1.0 degrees while Shimla recorded 4.8 degrees.

Cold wave also tightened its grip in Kashmir Valley and Ladakh region as the mercury went down across the division owing to continuous dry weather. Temperatures plunged by over seven degrees Celsius in Leh town making it the coldest place in the state.

In Punjab and Haryana, minimum temperatures hovered several notches above normal with Narnaul being recorded as the coldest place in both states at 4 degrees Celsius.

Chandigarh, the joint capital of the two states, recorded its minimum at 9.8 degrees, four notches above normal even as Amritsar in Punjab recorded a low of 8.6 degrees.

Ambala and Hisar recorded low of 10.4 degrees and 9 degrees respectively.

Jaipur, Sikar and Pilani recorded minimum temperatures of 4, 5 and 5.3 degrees Celsius respectively in the state even as 11 trains were delayed under North Western Railway due to dense fog.

Ministers not educated enough to deal with Pak: Jethmalani