Delhi cab rape case: As it happened on Wednesday

US-based online global cab company Uber was in for more trouble after Delhi Police slapped a case of cheating and violating lawful orders after one of its drivers was arrested for raping a 25-year-old woman business analyst. 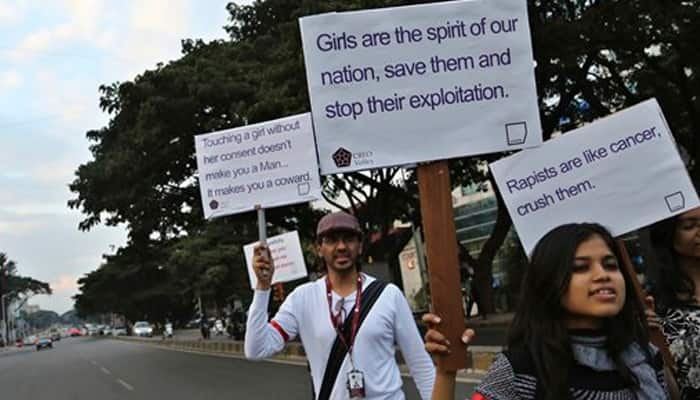 8:45 pm: Uber today finally ceased its operations in the national capital complying with a government ban imposed on it three days back. The move by the US-based firm came even as the Delhi Government and Traffic Police engaged in a blame game with both putting the onus on each other to enforce the ban. Police said Delhi Government's order banning the cab company in the city was hand delivered to its officials last evening after they claimed that the order was yet to reach them, as per PTI.

7:10 pm: The Maharashtra Government has decided to ban web-based taxi services in the state. "Orders have been issued to the Transport Commissioner to stop all the web-based cab booking services. He will take the required action immediately. Now, it is only a matter of time before the order is implemented by the Commissioner," Transport Secretary S K Sharma told PTI here today. The move comes after the state government received Centre's advice to ban all web-based taxi services, he said.

7:00 pm: We are doing everything we can. My heartfelt sympathies go out to the victim, we are very sorry, says Eric Alexander, Uber cab services, Asia-Pacific Head.

6:00 pm: Failing to enforce a ban on Uber cab service three days after announcing it, an embarassed Delhi Government today put the onus on Traffic Police to execute the order and ensure the US-based company ceases to operate in the city. The Transport Department said a it had communicated to Traffic Police to enforce the ban "effectively" and that it does not have resources to stop the company's operation. "We have asked the Delhi Traffic police to immediately implement the ban on web-based cab services, including Uber, in the national capital," a top Transport Department official told PTI.

5:55 pm: A delegation of Aam Aadmi Party MPs today met Union Home Minister Rajnath Singh and took up the issue of the security of women in Delhi while seeking that police be made more accountable in this regard, as per PTI.

5:45 pm: In the aftermath of the alleged rape of a woman in a cab in Delhi, Madhya Pradesh government has made installation of GPS-based navigation system in taxis and drivers' police verification mandatory. "We have made it mandatory for taxi operators to install GPS-based navigation system in their vehicles to keep a track on their movement," Madhya Pradesh Transport Minister Bhupendra Singh told PTI.

4:10 pm: The Delhi High Court today agreed to hear a PIL seeking measures to regulate radio cabs in the national capital, which were allegedly flouting existing norms and guidelines made by the government, days after a 27-year- old woman was raped by an Uber taxi driver. A bench of Chief Justice G Rohini and Justice Rajiv Sahai Endlaw said it will not dispose of the matter and will keep it pending after Additional Solicitor General Sanjay Jain, appearing for the Centre, submitted that steps have been taken in this regard.

2:45 pm: The Telangana Transport Department has started a crackdown on taxi/cab services operating "illegally" in Hyderabad and Cyberabad Police Commissionerate limits in the wake of a woman being allegedly raped by an Uber cab driver in Delhi.

2:05 pm: A delegation of Aam Aadmi Party met Rajnath Singh and said they discussed the issue of security of women in Delhi with the Home Minister and given him some suggestions. The minister has assured us that our suggestions will be taken into consideration, said AAP leader Dharamvir Gandhi.

1:00 pm: Congress leader Manish Tewari, on microblogging website Twitter, asked "why should Uber not be criminally culpable and prosecuted?" He added:

Why should Uber not be criminally culpable & prosecuted? Lady hired an Uber cab based on their credentials License termination is not enough

12:33 pm: Amid growing global uproar against US-based taxi service company Uber, a former driver with the company has been charged in New York with manslaughter in the death of a six-year-old girl when he rammed his car into the family as it was crossing a street last year.

11:48 am: The Delhi High Court admits case against Uber and other cab companies offering app-based services for violation of IT laws. Hearing is on Friday.

11:20 am: The Delhi Police recovers iPhone of rape accused driver Shiv Kumar Yadav, given by employer Uber, from Mathura.

11:10 am: Eric Alexander, the president of business for Uber in Asia, will be questioned for the second time today by the Delhi Police.

10:51 am: Underscoring his determination to ensure safety and security of women, Delhi Police Commissioner BS Bassi said he wanted to encourage self-defence training for women and would request the government to include this as part of students' curriculum.

9:49 am: Delhi has 11 districts and all the districts have the fast track court facility, said Rajnath Singh, adding the number of PCR vans has been increased to 1,000 in Delhi.

9:48 am: Conviction rate in rape cases is at 36 percent in Delhi which is much higher than the national average of 27 percent, added Singh amid fury over an increase in number of rape incidents in the national capital.

9:47 am: The Delhi government has identified ‘255 isolated & sensitive locations’ including roads, parks and other public spaces where police keep a vigil, further tweeted Singh. The government provides training in self defence to women and 14,373 women in Delhi have received the training in 2014 itself, added the minister.

Special investigation units have been constituted in 150 districts to investigate into crimes against women (rapes,acid attacks & dowrydeath

9:46 am: Women Helpline No 1091 is also running with increased capacity of 10 lines. Earlier it had only 4 lines, tweeted Singh. In the wake of the rape incident involving Uber cab driver, the Home Minister informed that installation of GPS is has been made mandatory in all public utility vehicles.​ He also tweeted:

CCTV cameras are also installed in 200 buses in Delhi.

9:20 am: Bharatiya Janata Party (BJP) spokesperson GVL Narasimha Rao said the manner in which he (Uber cab driver) has gone about violating rules and repeating crimes raise question mark on the system that we live in.

8:35 am: Home Minister Rajnath Singh had on Tuesday said he has asked state governments and union territories to ban all web-based radio taxis following the rape incident.

8:30 am: The Road Transport Association has decided to impose a ban on Uber cab services in Hyderabad, as per the government's advisory, after one of its drivers was arrested for raping a 25-year-old woman business analyst in Delhi.

8:00 am: US-based online global cab company Uber was in for more trouble on Tuesday after Delhi Police slapped a case of cheating and violating lawful orders after one of its drivers was arrested for raping a 25-year-old woman business analyst. It also emerged that the driver was involved in two earlier cases of rape and one of molestation.

The Delhi government on Monday banned "all activities" by Uber in the national capital and also blacklisted the firm from providing transport services in the city in future.

"The Ministry of Home Affairs has advised the state government and union territories to ensure that the operations of web-based taxi services are stopped and such service providers which are not licensed with the state governments or union territory administration are prohibited to operate till they get registered themselves with the administration," Rajnath Singh said in the Rajya Sabha.

Delhi Police cracked down on Uber, filing a case under Sections 420 (cheating) and 188 (disobedience to order duly promulgated by public servant) of the Indian Penal Code at the Sarai Rohilla police station in north Delhi on Tuesday.

The Tourism Ministry also advised state governments and union territories to deploy 'tourist police' for the safety and security of tourists.

Many metro cities, including Bengaluru and Mumbai, are verifying online cab services.

The Delhi Commission for Women has issued notice to Uber for laxity in verifying the background of drivers and also asked Delhi Police to submit a report on the rape case.

The accused driver, 32-year-old Shiv Kumar Yadav, who hails from Uttar Pradesh's Mathura, has also been booked for submitting forged documents to get a permit to ply his cab in the capital.

Yadav is accused of raping the woman in his cab while taking her to north Delhi Friday night. He was arrested Sunday from his native place Mathura.

Yadav, who is in three-day police custody, has confessed to his crime and told police that he raped the woman after parking his car in a secluded spot beside Zakhira bridge in north Delhi. He said the woman kept screaming for help for 30 minutes as he slapped and threatened her.

Police said Yadav has no remorse for the act. He was also not expecting police to act so fast in the matter and arrest him.

According to police, Yadav confessed that he was always on the prowl for women travelling late at night, especially those who he thought were vulnerable.

"Shiv Kumar Yadav was involved in a molestation case in 2003, in a case related to the Arms Act in 2006, and rape and robbery in 2013 in Mainpuri. He was arrested and charge-sheeted in all cases," a police officer told a news agency.

In 2011, he was involved in raping a woman in his taxi in Delhi. He spent seven months in jail but got bail after the woman turned hostile in court.

Yadav was also an accused in at least two cases under the Uttar Pradesh Control of Goonda Act, an officer said.

All the cases are under trial and he is out on bail.

Yadav married the widow of his younger brother and has two daughters and a step son.

He had submitted a forged character certificate purportedly issued by Delhi Police to get a tourist taxi permit.

Meanwhile, upset by the nationwide adverse publicity, the Radio Taxi Association of India (RTAI) has vouched for its services as "safe, trustworthy and reliable".

RTAI president Kunal Lalani expressed grief over the Delhi incident and reiterated the members' commitment to adhere to rules and guidelines as per law, and assured that all passengers, including women, would be provided safe services by the licenced operators.

Jyotish Guru Show: Know how will be your day today

Know the present condition of Turkey and Syria post Earthquake

More than 7800 dies in Turkey-Syria Earthquake

DNA: Rahul 'fires' on Modi government on the pretext of Adani

DNA: When the British East India Company occupied the Awadh region in 1856