As the flood situation in Assam continued to remain grim, Home Minister Rajnath Singh on Saturday conducted an aerial survey of flood-hit areas. 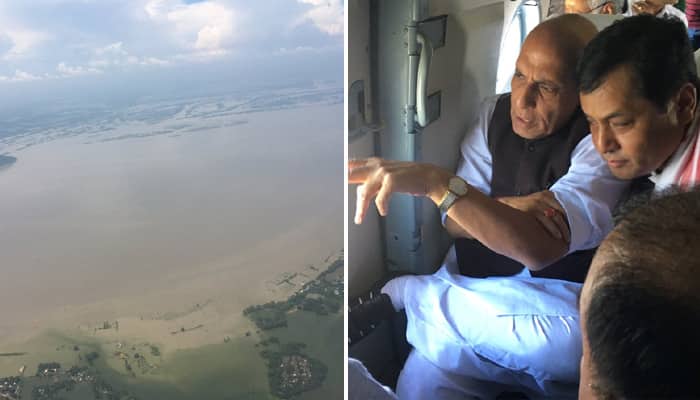 Assam Chief Minister Sarbananda Sonwal and Union Minister of State for Development of North Eastern Region Jitendra Singh were also on the flight.

"Leaving New Delhi for Guwahati to take stock of the situation in flood-affected areas of Assam," Rajnath Singh had tweeted earlier this morning.

The minister is also expected to visit the Bhagatgaon camp set up for the flood-affected residents in Morigaon district.

At least 20 persons have been killed so far in Assam due to the floods while an estimated 19 lakh people have been affected in the state's 21 districts.

The floods in Assam have been triggered by heavy rainfall and swelling of rivers caused due to incessant rains in upper catchment areas of Arunachal Pradesh and Bhutan.

The mighty Brahmaputra river is flowing above the danger mark at Guwahati, Nematighat in Jorhat, Tezpur in Sonitpur, Goalpara and Dhubri towns.

NDRF, SDRF and the Army are helping the administration in evacuating the affected population to safe places.

The State Disaster Response Force (SDRF) teams with deep divers have also been attached to the 27 Fire Stations of the State.

Authorities in Assam have opened more than 800 temporary shelters and food and medicines distribution centres across the state, a senior SDRF official said.

Flooding is an annual problem in Assam state.

Indian-origin woman found guilty of starving step-daughter in US