JNUSU president Kanhaiya Kumar may have had information about the event held on February 9 in the university, as per reports on Sunday. 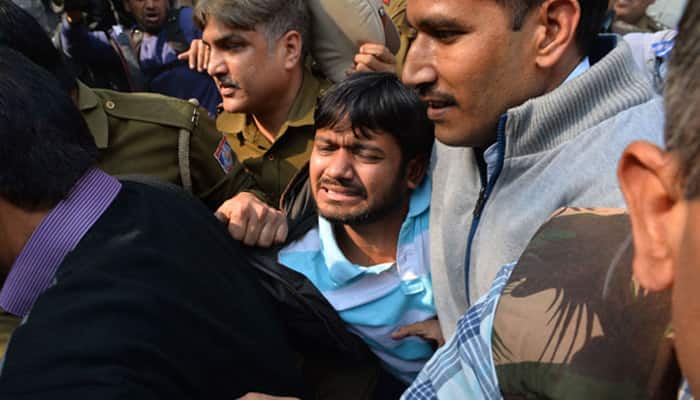 Delhi: JNUSU president Kanhaiya Kumar may have had information about the event held on February 9 in the university, as per reports on Sunday.

ANI quoted sources as saying JNU Registrar Bhupinder Zutshi has told the inquiry committee that Kumar had information about the event held on February 9 in the campus.

The news agency also quoted sources as saying that Kanhaiya had called the Registrar after Dean of Student Welfare had cancelled permission for the event.

PTI also quoted that Zutshi has claimed that Kumar had objected to cancellation of permission for the controversial event against hanging of Parliament attack convict Afzal Guru.

Zutshi, deposing before the high-power enquiry committee constituted by Vice Chancellor M Jagadesh Kumar, is believed to have said that Kanhaiya Kumar was against the authorities' decision to cancel permission of the February 9 event during which anti-national slogans were allegedly raised.

"I had called a meeting of JNSU in my office at 3 pm on February 9 to discuss the route for the new bus acquired by JNU for disabled students. Kanhaiya Kumar and Rama Naga (JNUSU General Secretary) reached first. Around 3 pm, we had a discussion on the bus route. After 10 minutes, Saurav Sharma (ABVP member and JNSU joint secretary) also came. We all discussed the bus route for 10 minutes. Sharma later showed me a pamphlet regarding the 'cultural event' on 'judicial killing of Afzal Guru' and said some of the students are organising this event today (February 9, 2016) at 5 pm at Sabarmati Dhaba," Zutshi has told the committee.

The Registrar has further maintained that when the varsity decided to withdraw the permission, Kanhaiya had called him objecting to the cancellation.

JNU had instituted a disciplinary committee on February 10 to probe into the controversial event.

On the basis of the preliminary enquiry report eight students including Kanhaiya were academically debarred.

The five-member committee which has been granted two extensions for submitting its report is expected to come up with its recommendations by March 11.

Students including Kanhaiya, have already refused to depose before the committee demanding that the preliminary inquiry was conducted in an absurd manner and students suspended without questioning.

The students have been demanding that committee starts its enquiry afresh, a demand which has been ruled out by the university.

Zutshi, is also under criticism from a section of students and teachers for allegedly mishandling the issue.

Meanwhile, CPI today expressed concern over the security of Kanhaiya in the wake of announcement of cash rewards for anyone "shooting him down" and "cutting off" his the tongue by some elements.

"Kanhaiya is safe in JNU campus, but he has threat outside the campus," CPI National Secretary Amarjeet Kaur told reporters.

Stating that Kumar, also a CPI member, had become the symbol of 'Save India democracy', she demanded the Centre carry out investigation into the JNU row to find out the truth.

Police asks JNU to keep it informed about Kanhaiya's movement

As part of efforts to provide foolproof security to Kumar, Delhi Police has asked University authorities to inform them about the student leader's movements outside the campus and nature of his visits.

In a letter to University authorities sent after Kumar's release from jail, DCP (South) Prem Nath wrote that the SHO of Vasant Kunj (North) Police Station, which has the campus under its jurisdiction, should be informed well in time about "the movements/visits of Kumar outside the campus, including nature of visit and travel mode so that necessary security/preventive measures may be taken to prevent any untoward incident".

A police source said the move comes in view of the court's directive after the attack on Kumar at Patiala House court complex on February 17, which said police must ensure that none of the students arrested in connection with the sedition case suffer even a scratch.