According to Times Now, Hurriyat leaders such as Syed Ali Shah Geelani and Mirwaiz Umer Farooq will join the discussions with Pakistani envoy Abdul Basit. 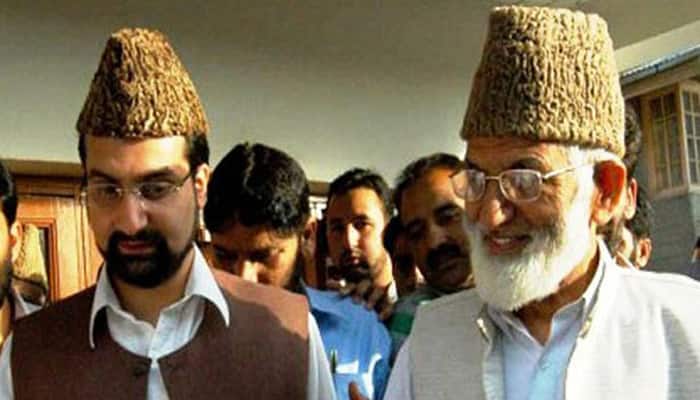 New Delhi: Top Hurriyat leaders from Kashmir on Thursday met the Pakistani High Commissioner here amid uproar by the opposition Congress for allowing them to hold talks.

According to Times Now, they were to hold discussions on the Kashmir issue.

Criticising the Modi government, the Congress questioned if this is what the ruling-BJP meant by nationalism.

Hurriyat leaders Syed Ali Shah Geelani and Mirwaiz Umer Farooq have met the Pakistani High Commissioner, Abdul Basit at the embassy here for a lunch meeting, which reportedly lasted for about an hour.

After the meeting, Mirwaiz told media persons that "Kashmir being an important element of the composite dialogue, we feel some Kashmir specific measures need to be taken on the ground."

He also said that they discussed the Pathankot incident and "Pakistanis are very keen to see their investigation team in Delhi."

He did not divulge more about the meeting.

Both Mirwaiz and Geelani are in Delhi at the invitation of Basit for the Pakistan Day function held at the Pakistani High Commission on Wednesday.

Before leaving for New Delhi to attend the Pakistan Day function on Wednesday, Mirwaiz had said that "Hurriyat conference is not against any country or nation.

"We have always welcomed the dialogue process between India and Pakistan. We hope the two counties would evolve the ways and means to include the people of Kashmir in the composite dialogue process.

"We believe the vision of Atal Bihari Vajpayee would be carried forward in which he said issues should be settled within the parameters of 'Insaniyat' (Humanity) which is much greater than the parameters set by the constitution."

Mirwaiz dismissed opposition to the separatist leaders attendance at the Pakistan Day functions in New Delhi.

"It is like creating a storm in the tea cup. We have always been attending these functions at the invitation of Pakistan High Commission. We go there to put forth our viewpoint and not to oppose anybody," Mirwaiz said.

On Wednesday, Environment Minister Prakash Javadekar attended the Pakistan Day function at the high commission here as the official representative of the Indian government.

Earlier in the day, Prime Minister Narendra Modi greeted the people of Pakistan on their National Day.

"Greetings to the people of Pakistan on their National Day," he tweeted.