The first phase of NEET was conducted on Sunday. The second phase will be held on July 24. 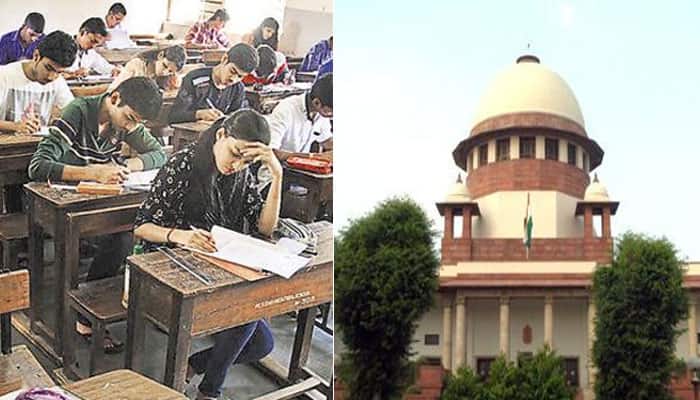 New Delhi: The Supreme Court is scheduled to hear a fresh plea of few states, including Jammu and Kashmir, and some private medical colleges that NEET for admissions to undergraduate medical courses like - MBBS and BDS - may not be thrust on the states and they may be allowed to conduct their own entrance examinations.

A bench headed by Chief Justice TS Thakur had yesterday said that the hearing by the special bench headed by Justice Anil R Dave will take place today at 2 pm after a battery of senior lawyers, including Gopal Subramaniam appearing for Jammu and Kashmir, and KK Venugopal appearing for Association of Private Medical Colleges of Karnataka, mentioned the matter.

Various states, including the associations of private medical colleges are aggrieved by the top court's Friday order reiterating that admission to undergraduate medical courses will be only through National Eligibility Entrance Test (NEET) to be conducted by the Central Board of School Education (CBSE).

Subramaniam, appearing for Jammu and Kashmir said that the entrance test being held by the state administration be allowed to go on as per schedule on the ground that it has been granted a special status.

Venugopal, who represented some private medical colleges of Karnataka, made similar pleas that the pre-scheduled entrance test may be permitted to go on alongside the National Eligibility Entrance Test (NEET).

Similar requests were made by the counsel representing Andhra Pradesh and Tamil Nadu. All these fresh pleas would be heard tomorrow by another bench headed by Justice AR Dave which had recently recalled its earlier order and permitted NEET to be conducted.

The apex court had on April 29, said that the entrance test for admission to MBBS and BDS courses for the academic year 2016-17 will be held as per the schedule through the two-phased common entrance test NEET on May 1 and July 24.

The first phase of NEET was conducted on Sunday. The second phase will be held on July 24.

On April 28, the court had rejected opposition for holding NEET by states, including Tamil Nadu, Andhra Pradesh, Telangana, Uttar Pradesh and Association of Karnataka Medical Colleges, besides minority institutions like CMC, Vellore.

The apex court order had implied that all government colleges, deemed universities and private medical colleges would be covered under NEET and those examinations which have already taken place or slated to be conducted separately stand scrapped.

It had also revived the government's December 21, 2010 notification for holding a single common entrance test through NEET with a clarification that any challenge on the issue would directly come before it and no high court can interfere.

Notably, under Article 254 if a law enacted by the state legislature is inconsistent with the law made by the Parliament on a subject falling under the concurrent list, then the central law would prevail. However, the state law would continue to operate in the state if it has been reserved for the consideration of the president and has received his assent.

However, this would not come in the way of Parliament to enact a law that would added to, amend or even repeal such a state law.

Noting that the working of the Medical Council of India was not satisfactory, the constitution bench set up a three member committee comprising former chief justice RM Lodha, former comptroller and auditor general Vinod Rai and Institute of Liver and Biliary Sciences director Shiv Sarin to oversee its working.

Asking the government to issue notification for the committee, the bench had said: "The committee will function till the central government puts in place any other appropriate mechanism after due consideration of the Expert Committee Report."

Initially the committee, the court had said, would function for a period of one year, unless suitable mechanism is brought in place earlier to substitute it.

Directing the listing of the matter after one year, the court hoped that within the said period the central government would come out with an appropriate mechanism.