Union Home Minister Rajnath Singh, who arrived here on Monday on a three-day visit to Jammu and Kashmir, warned Pakistan over repeated ceasefire violations along the international border. 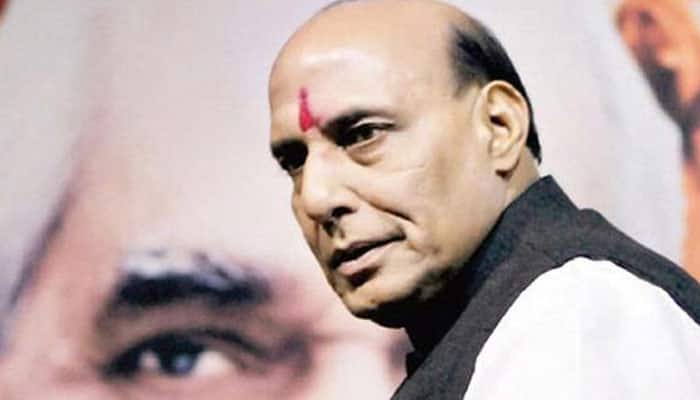 Samba: Asserting that India does not have expansionist ambitions, Home Minister Rajnath Singh on Monday said it has always endeavoured to have better ties with neighbours particularly Pakistan and China and all issues including border disputes and terrorism can be resolved through talks.

Singh, who started his three-day visit to forward areas along the borders with Pakistan and China, said India "only wants to defend its borders" and infiltration and transgressions from across the frontiers should stop. He said India was ready to take lead to improve ties with neighbours but would not compromise on honour and dignity.

"We want better relationships with China and Pakistan. Peace cannot prevail in Asia and the continent cannot prosper on the path of development" till India's relations with them improve, Singh said while addressing ITBP troops, who guard India's border with China, at a function here.

"Whether it is a question of border disputes or issues of terrorism, I feel all the issues can be resolved through talks," he said, adding, "India is a peace loving country. We only want to defend our borders."

"Why I am saying this with full determination because India is the only country in the world where saints and sages have not only considered people living within the borders as its citizens, but also the other people living in the world," he said.

"We have given the message to the world about the philosophy of 'Vasudhaiva Kutumbakam' -- the whole world is a family... Due to this we want good relations with all,"

Not only with China, but Indian wants "heart-to-heart" relationship with all neighbouring countries, he said.

Earlier speaking to reporters, Singh said, "I always wish for better relationship with our neighbours. It is always an endeavour from our side. We have extended our hand (of friendship to Pakistan and China)."

He was replying to a volley of questions about major ceasefire violations by Pakistan and transgressions on Sino- Indian border.

Replying to a question about increase in border skirmishes and plight of people living along border, Singh said, "I want to reassure the people of the country that there will be no compromise with the security, honour and dignity of the country by our government."