Gandhinagar: Union Minister for Overseas Indian Affairs Sushma Swaraj on Wednesday called on the diaspora youth gathered here to "come, connect, celebrate and contribute" to be part of the "momentous transformation taking place in the country". 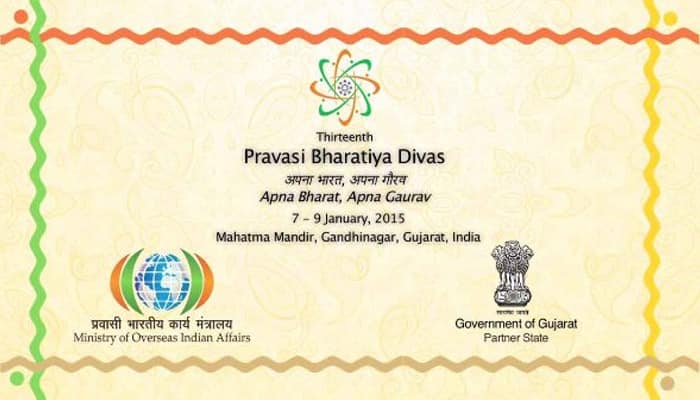 Gandhinagar: Union Minister for Overseas Indian Affairs Sushma Swaraj on Wednesday called on the diaspora youth gathered here to "come, connect, celebrate and contribute" to be part of the "momentous transformation taking place in the country".

Speaking at the inauguration of the 2015 Youth Pravasi Bharatiya Divas (PBD), Sushma Swaraj, who is also the external affairs minister, urged the diaspora youth to contribute to the country's development.

She said the Narendra Modi government has taken several measures to ease the business environment, including by rationalising rules and identifying obsolete laws.

The minister said the clear focus of the Modi government is on infrastructure development and the government is moving towards a transparent policy.

Earlier, welcoming hundreds of youth delegates, Sushma Swaraj said it is a special joy to interact with the youth "who share a special bond of heart with India".

She said the PBD is a platform to connect the diaspora with the motherland and promote the concept of a global Indian family.

With this, the 13th edition of Pravasi Bhartiya Divas convention began in Gujarat's Gandhinagar amid tight security in the wake of 'terror' boat incident in Arabian sea.

NRIs from over 58 countries are expected to participate in the three-day convention, which marks the contribution of the overseas Indian community in the country's development.

The event aims at connecting India to its vast overseas Diaspora and bring their knowledge, expertise and skills on a common platform. 2015 is the centenary year of the return of Mahatma Gandhi to his motherland from South Africa on January 9, 1915, from where he led freedom struggle against the British.

After landing in Mumbai, Gandhi travelled extensively in the country before establishing his base at Sabarmati Ashram here on the banks of Sabarmati river.

On the first day of the event, US-based astronaut Sunita Williams, who has roots in Gujarat, will take part in the 'Youth PBD' programme at Mahatma Mandir in Gandhinagar, besides Sushma Swaraj.

After the inauguration, a plenary session on 'Bharat ko Jano' and 'Bharat ko Mano' will be held and there will be a talk on 'Thoughts of Gandhi in 21st century referring to youths'.

During the 'Bharat ko Jano' (Know India) session, the Diaspora youth would be told about India's age old culture, traditions and hospitality, while at the 'Bharat ko Mano' session the youth would be told about modern India and its innovations, like Mangalyaan or the Mars mission, about India's missile technology and expertise in IT, Sushma Swaraj said.

Prime Minister Narendra Modi is scheduled to inaugurate the main event on January 8 where Foreign Minister of South Africa, Maite Nikoana-Mashabane will be the guest of honour and President of Guyana Doland Ramotar the chief guest. Ramotar will also be presented the Pravasi Bharatiya Samman, the highest honour conferred on overseas Indians and people of Indian origin (PIOs).

Modi will also inaugurate an exhibition on the life of Mahatma Gandhi at the venue.

The event will have a battery of speakers including Vice President Hamid Ansari, Narendra Modi, senior Cabinet ministers, besides prominent NRI personalities spanning the fields of education, politics and business.

On the last day of the event, chief ministers of various states will try to seek investment from NRI delegates in their respective states.

Mahatma Mandir in Gandhinagar, the convention venue in Gujarat's capital, is all decked up to welcome the Indian diaspora, who are arriving in hundreds from countries across the world, for the Pravasi Bharatiya Divas.

India is also the single largest recipient of remittances from abroad at USD 70 billion.

The bridges on Sabarmati river and Riverfront in Ahmedabad and Mahatma Mandir in Gandhinagar have been festooned with decorative electrical lighting and the twin cities spruced up to welcome the delegates.

With the PBD to be followed by the Vibrant Gujarat Global Summit 2015 on January 11-13, each being attended by Prime Minister Narendra Modi accompanied by world leaders from political and business circles, a tight security net has been thrown across the Gandhinagar as well as Ahmedabad, 27 km away, where too some of the diaspora events will be held.

The PBD would be hosting some special events, including four special sessions - on issues of Labour and Employment in Gulf countries, a session on Girmitiyas, session on the Francophone diaspora, and Role of Indian Diaspora Organisations.

The session on Girmitiyas would see the participation of Persons of Indian Origin (PIO) countries, where Indian origin people - the descendants of Indian indentured labour - live, like Suriname, Mauritius and Guyana.

The session on Indians in the Gulf countries, where over seven million Indians live and work, would be participated by Indian envoys of six countries from the region. It would help the Indian expatriates voice their concerns about labour and employment.

The session on Francophone Diaspora would see members from Mauritius, Reunion Island and Guadeloupe among others air their concerns.

Gujarat is the partner country for the event. Ten Indian states, including the non-Bharatiya Janata Party (BJP) states of Uttar Pradesh, Kerala and Nagaland, are participating. The BJP states are Gujarat, Goa, Madhya Pradesh, Chhattisgarh, Rajasthan, Haryana and Maharashtra.

Finance Minister Arun Jaitey and Commerce Minister Nirmala Sitharaman would address the session between the chief ministers and NRI businesspersons during which the Modi government's Make in India, Swachh Bharat, Skill India, Clean Ganga projects and Tourism would be highlighted and the diaspora invited to participate in the projects.

Vice President Hamid Ansari would be present at the closing ceremony on January 09 and present the Pravasi Bharatiya Samman awards.

Gujarat being the host state for the first time would fete the delegates at a dinner and a cultural evening on January 08 on the banks of the Kankaria Lake, Ahmedabad, and the following day on the Sabarmati riverfront.