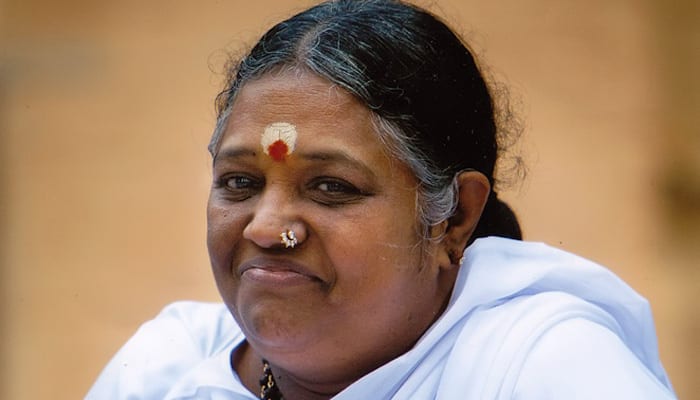 A spiritual leader and humanitarian of renown, Mata Amritanandamayi, fondly referred to as Amma, handed over a draft of Rs 100 crore to Union Finance Minister Arun Jaitley.

Speaking on the occasion, Jaitley said, “Today is a memorable day for all of us and I must confess for me in particular...its memories will carry on indefinitely with me.”

“Amma has come to symbolise spiritualism, philanthropy, service, the art of giving and spreading the message of love and affection,” he said.

“This Rs 100 crore has more than a material relevance. Rs 100 crore is an substantial amount when it comes from a single institution. But it gains more importance when a saint of eminence as Amma takes the first step then it sends a message across the country,” he said.

As per a press release from the MAATH, the money is to be utilised for the express purpose of building toilets in the poor villages surrounding the Ganges.

Prime Minister Narendra Modi and Amma had first discussed the possibility of the Math joining hands with the government on the Clean Ganga Project during a visit to Delhi on March 28 this year.

During the meeting, the Prime Minister had conveyed his gratitude to Amma for the Math's environmental initiatives, which he said were very much in line with his own Swachh Bharat programme, the release added.

The Mata Amritanandamayi Math had launched its Amala Bharatam Campaign (ABC) in 2010 with the goal of improving public health and restoring India's physical beauty.

As part of ABC, lakhs of volunteers are regularly cleaning public areas and spreading awareness in schools regarding the proper methods for the disposal of trash and the importance of not spitting or urinating in public.

The campaign also saw volunteers taking up a massive annual cleaning of the world-famous Sabarimala pilgrimage site and Pampa river, the release said.

DNA: Pakistan will be trapped by India's new strategy!

DNA: 'Ratna' to be honored with 'Padma Award'

DNA: When Hindi was declared the official language of India in 1965

DNA: See the valor of the army on 74th Republic Day