On the third anniversary of Nirbhaya gang-rape case, activists on Wednesday said that women continue to face violence in every sphere of life. 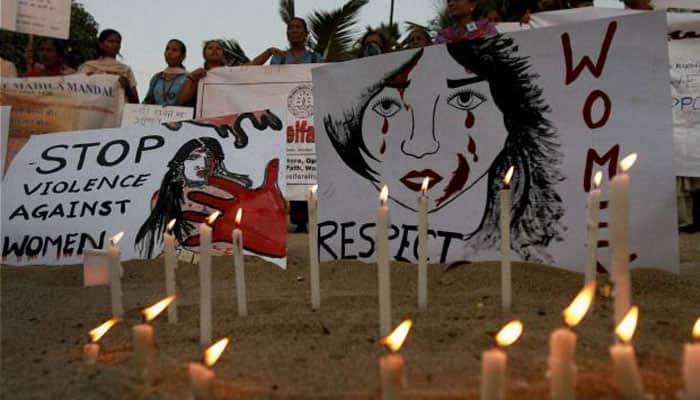 New Delhi: On the third anniversary of Nirbhaya gang-rape case, activists on Wednesday said that women continue to face violence in every sphere of life and that it was the certainty of justice which can bring about a change and not the severity of punishment.

"In the three years since December 2012, women continue to face violence in every space they occupy, including their own homes, public transport and at workplaces. There have been many attacks on women and girls, some accompanied by huge media coverage, but most taking place away from the public
glare," Kavita Krishnan, Secretary of the All India Progressive Women's Association said.

Krishnan is signatory to a statement endorsed by 108 women activists, students and faculty from DU, JNU and Ambedkar university and progressive leaders, issued on the third anniversary of the December 16 gang-rape case today.

"The government is using issue of violence against women to push through regressive policies like death penalty, or lowering the age of juvenile - even though the Justice Verma Committee carefully considered and rejected these measures as counter - productive and against the interests of victims of gender violence," the statement said, as per PTI.

The 23-year-old paramedical student was brutally sexually assaulted on the ill-fated night of December 16 three years ago, and died 13 days later, triggering a massive public outrage. Among many, her spirit continued to live, and in tribute she was given the name 'Nirbhaya' or brave heart.

Meanwhile, the parents of Nirbhaya today fiercely opposed the release of the convict who was found to be a juvenile at the time of the crime.

"If a juvenile commits a heinous crime, he must be kept with wild animals. We must not set them free. Our laws are flawed. The juvenile laws should be made applicable only for the people committing petty crimes, not for heinous crimes," Nirbhaya's father Badrinath said, as per IANS.

Badrinath said he will continue his fight to seek justice for his daughter.

"It is quite agonising. Do not know if Indian women will ever have a safe and secure environment. We will keep fighting. It will help my daughter's soul rest in peace," he added.

On the other hand, Ranjana Kumari, director, Centre for Social Research (CSR), also spoke on the occasion to mark the third anniversary of the horrifying gang rape.

"A lot needs to be done. We will find ourselves nowhere in our fight against women if we work with the proverbial approach of 'slow and steady wins the race'. We need to involve schools, colleges, universities, police and other stakeholders to taking on the menace of crime against women," Ranjana Kumari said.

She pointed out that the Nirbhaya fund, unused since its initial announcement in 2013, needs to be utilized to provide a safer environment for women.

She cited National Crime Records Bureau (NCRB) data and said that an increase of 9.2 percent was reported in crime against women during 2014 as compared to 2013.

Lalitha Kumarmangalam, chairperson of National Commission for Women (NCW), said, "We at the NCW are working to devise a multi-pronged strategy to ensure swift action and speedy trial in cases of crime against women."

All India Progressive Women's Association (AIPWA) also launched a gender sensitisation campaign today during which discussions will be held and sensitisation material distributed in various parts of Delhi.

Women have a right 2 feel safe live without fear of violence.Tweet using #LightACandle & tag @MKBKSH_ to show your support #IPledgeNow