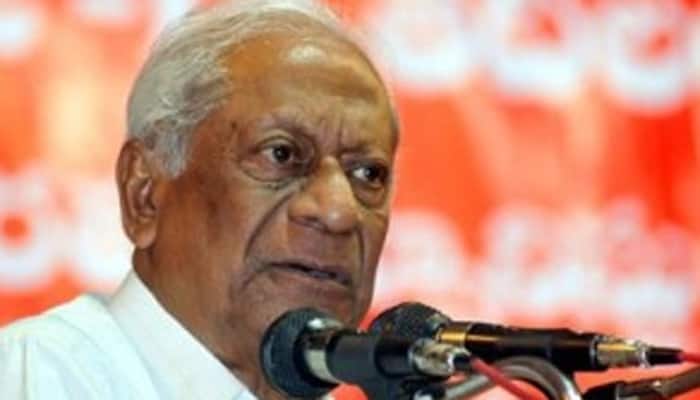 New Delhi: Veteran Communist leader Ardhendu Bhushan Bardhan passed away here on Saturday. He was 92-year-old and was being treated at GB Pant hospital in the national capital.

"The CPI leader died at 8.20 pm. Our team tried hard but could not save him. His condition was very critical," said Dr Vinod, who led the medical team at GB Pant Hospital here.

The veteran CPI leader was undergoing treatment after tests detected a blood clot in his brain and had described his condition as "critical" .

Bardhan had suffered a paralytic stroke on December 7, following which he was admitted to the hospital.

"He is still critical and is partially responding to medicines. Doctors have kept him under observation and are waiting for improvement to take further action," CPI had said earlier in a statement.

Speaking to news agency ANI, party national secretary D Raja said, "Its a great loss not only for CPI but for entire communist movement of country."

"His demise marks the end of an era of communist leaders who fought for independence of the nation," he added.

Saddened to hear of the demise of senior CPI leader AB Bardhan ji. He was known for his deep concern for workers, poor and needy.

With the demise of Shri AB Bardhan the country has lost one of the pillars of left wing politics. My condolences to his grieving family.

West Bengal Chief Minister Mamata Banerjee, in her condolence message, said, “Saddened at the passing of veteran politician AB Bardhan. Condolences to his family and colleagues in his party."

Marxist leader Sitaram Yechury, Delhi Chief Minister Arvind Kejriwal and Bihar CM Nitish Kumar were also among a host of leaders to condole the death of the veteran leader.

"V sad to hear the demise of Comrade Bardhan. May his soul rest in peace," Kejriwal tweeted.

V sad to hear the demise of Comrade Bardhan. May his soul rest in peace

Nitish Kumar posted: "Deeply saddened to hear of Veteran CPI leader A B Bardhan ji's death.He was a leading figure of the trade union movement & a voice of the poor."

Deeply saddened to hear of Veteran CPI leader A B Bardhan ji's death.He was a leading figure of the trade union movement&a voice of the poor

Ardhendu Bhushan Bardhan has been a leading figure of the trade union movement and Left politics in Maharashtra. He had won as an Independent candidate in Maharashtra Assembly polls in 1957.

He later rose to become the General Secretary and then President of All India Trade Union Congress, the oldest trade union in India.

'Terrorists may have sneaked in through Bamiyal village'