Over 96,000 people have so far been evacuated to safety from flood-ravaged parts of Jammu and Kashmir by the Armed forces as the rescue and relief operation enters its 10th day Thursday. 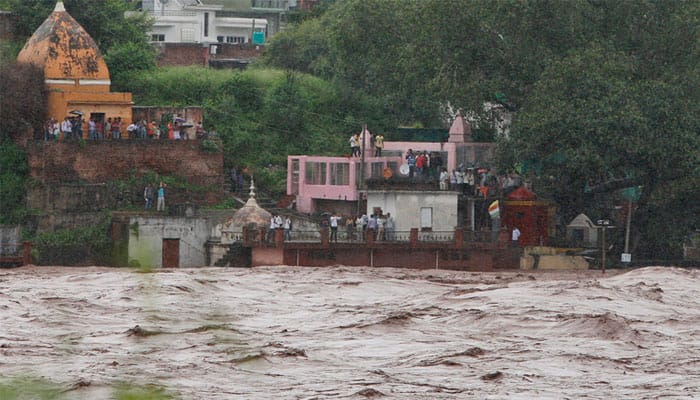 Jammu: Over 96,000 people have so far been evacuated to safety from flood-ravaged parts of Jammu and Kashmir by the Armed forces as the rescue and relief operation enters its 10th day Thursday.

"Over 96,000 persons have been rescued so far by the Armed forces and NDRF from different parts of Jammu and Kashmir in the ongoing rescue and relief operations in the state till today," Col S D Goswami, PRO, Army's Northern Command said.

He said that 'Mission Sahayata' in Kashmir and 'Mission Rahat' in Jammu region have entered their 10th day as 84 transport aircrafts and helicopters of Air Force and Army Aviation Corps and 35,000 troops have been pressed into service. 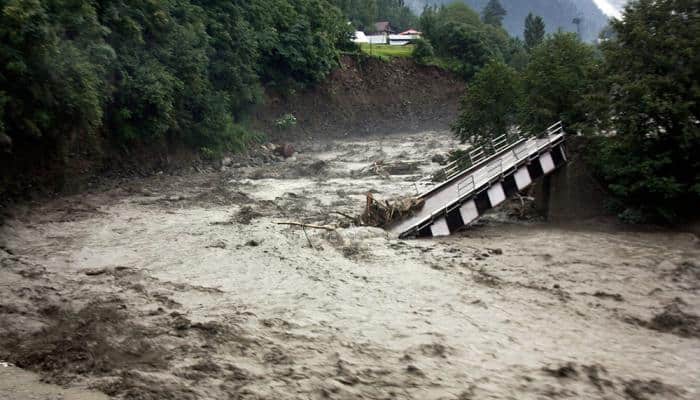 So far, 930 sorties have been undertaken by the choppers and aircraft of the services out of which 97 were carried out today. 1,237 tonnes of relief materials were dropped by the Air Force.

As many as 224 boats of Army and 148 boats of NDRF have been pressed into service, he said. Elections 2014 Over 5 lakh people stranded in parts of J&K still await help, as per reports.

Armed forces have set up 19 relief camps across the state , housing at least 20,000 flood-affected people, and provisions have been made to distribute essential food items and water bottles to them.

Camps have been set up at BB Cantt, Avantipur, Old Airfield, Sumbal, Chattargam, and Zeishta Mata Mandir in Srinagar region, where 20,000-25,000 rescued people were being sheltered and provided with food and other basic amenities, they said, adding, personnel are distributing water bottles and food packets on a large scale in the flood affected areas.

In an endeavour to provide speedy medical aid to the affected populace, 80 medical teams of the Armed Forces Medical Services were already operating in full swing, they said. Till now they were able to treat more than 21,500 patients.

As the Army stepped up rescue operations in the flood ravaged Kashmir Valley, Indian Oil Corp (IOC) has airlifted aviation fuel (ATF) to Srinagar to aid air sorties to the marooned valley.

Shiromani Gurdwara Parbandhak Committee (SGPC) has stepped up efforts to provide succour to flood-affected people of Jammu and Kashmir and so far over 120 quintals of food material have been airlifted while a relief camp has been set up in Srinagar.

A day after Prime Minister Narendra Modi directed the Home Ministry to provide full assistance to Jammu and Kashmir government and coordinate in rescue and relief operations being carried out in the flood-hit state Jammu and Kashmir, MoS PMO Jitendra Singh arrived in Srinagar this morning to monitor situation.

Home Secretary Anil Goswami along with other officers will also visit Srinagar on Thursday to oversee relief and rehabilitation work.

The frustration and anger among the local residents stranded in parts of Jammu and Kashmir, who are desperately looking for food, help and their missing relatives, is growing even as the government agencies are trying to hard to reach out to them and provide all possible help.

The armed forces continued their coordinated efforts on Thursday in Jammu and Kashmir, rescuing over 90,000 people so far as the toll in the state's worst flood in six decades reached 215. Prime Minister Narendra Modi on Wednesday took stock of the situation and was briefed on the status of operations, amid concerns about the possible outbreak of water-borne diseases.

Flood waters receded in the Kashmir Valley Wednesday but anxiety prevailed among people who are still stranded. Over 90,000 people have been rescued so far in the state by the armed forces and the National Disaster Response Force.

However, there was a sense of despondency and apprehension among families who lost a large part of their belongings in the flood waters. Many people are trapped in Srinagar city alone that submerged in the flood waters during the intervening night of Saturday and Sunday.

Officials said 215 people have died in the floods. "Unless the flood waters recede completely, and we are able to reach all the submerged areas, we cannot be sure about the exact toll in these floods," a state official said.

Officials also said many more could still be trapped in submerged areas. People rescued from various parts of Srinagar recalled the horror. They said the cries for help of many others in their areas had stopped, indicating they had either died or were resigned to their fate and knew that the chances of their survival were bleak.

Areas like Rajbagh, Jawahar Nagar, Gogji Bagh, Bemina, Mehjor Nagar, Karan Nagar and Qamarwari in Srinagar were still submerged. Many Kashmiris feel the state government has failed to reach out to the affected people.

Chief Minister Omar Abdullah, however, dismissed the criticism that his government did not do enough. "This is an unprecedented situation. There is no way we could have prepared for it. Operations are being cranked up, supplies are arriving and we are doing our best," he said.

Army chief Gen. Dalbir Singh Suhag, who visited the flood-hit state Wednesday, said the situation has improved and the army was working day and night to provide relief to those affected.

The army chief assured that the forces will help everyone. An acute crisis of petrol and kerosene has hit the Kashmir Valley. On Wednesday, all filling stations in Srinagar said they have run out of fuel.

The Srinagar-Jammu National Highway continued to be closed for the seventh day Wednesday, but traffic on the 440-km long Srinagar-Leh highway was restored Tuesday. The road link between Poonch and Rajouri in Jammu region has also been restored.

Eighty transport aircraft of the Indian Air Force and Army Aviation Corps have been pressed into relief operations. In view of the huge magnitude of the calamity, the central government is assisting the state in further ramping up the rescue and relief operations.

Apart from providing food and water to the people, the central government is keen to help the state in paying more attention to hygiene and sanitation in the water-logged areas of Srinagar to prevent any outbreak of water-borne diseases. While 8,000 landlines were activated in Srinagar, mobile phone services have also been partially restored.

A fallout of the floods has been the breakdown of the communication systems in Kashmir. The radio station and Doordarshan facility have been shut for the last four days. Congress leader Karan Singh - who hails from Kashmir - said the state had witnessed its worst floods "in living memory".

Flood waters recede in Jammu and Kashmir but tempers rise

Threat call received to 'Blow Up Ram Janmabhoomi' complex in Ayodhya: UP Police

Moody's made a big claim regarding Adani Group

Prahlad Josh Makes Big Statement on opposition's uproar in Parliament, 'Government has nothing to do with Adani Case'