Complying with the Supreme Court direction, the Karnataka government on Wednesday released Cauvery water to Tamil Nadu amid intensifying protests by farmers. 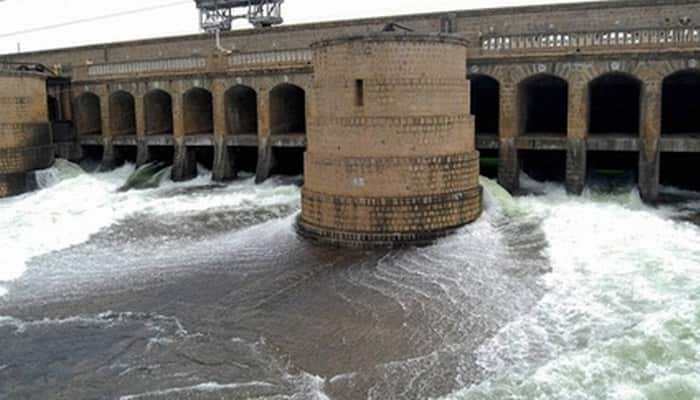 Bengaluru: Complying with the Supreme Court direction, the Karnataka government on Wednesday released Cauvery water to Tamil Nadu amid intensifying protests by farmers.

The Supreme Court had directed the Karnataka government to release 15,000 cusecs per day to the neighbouring state for 10 days.

Meanwhile, protesters have intensified their agitation in Mandya and other parts of the state blocking several roads and forcing schools and colleges to shut down.

The government said it was "inevitable" for it to comply with the Supreme Court order even though the state itself was facing "serious distress". However, it added that it would move the SC, seeking modification of its order to spare 15,000 cusecs of water for 10 days because of the difficulties in implementing it given that the live storage in four reservoirs in the Cauvery basin now was 46.7 TMC ft against their capacity of 104 TMC ft.

"It is inevitable for Karnataka to comply with the Supreme Court order in the interest of the state," top government sources said, adding, "constitutionally, it is not possible to defy it".

Officials confirmed that water was being let out since midnight last night, shortly after the all party meeting called by Chief Minister Siddaramaiah, who said the decision to obey the Supreme Court order has been taken with "a heavy heart" even though the state itself faced "severe distress".

The present live storage is 45 percent against the live storage of 104 TMCFT in the Krishnaraja Sagar, Harangi, Hemavathi and Kabini reservoirs, the sources pointed out.

The legal and technical teams of Karnataka would work out the extent of change that the state should seek in the quantum of water release stipulated in the Supreme Court direction which asked Karnataka to provide 15,000 cusecs for 10 days.

The Cauvery Supervisory Committee, which has replaced the Cauvery River Authority to implement the order of the tribunal, would also be apprised of the difficulties.

Sources said the Supervisory Committee would visit both the riparian states to assess the "ground realities" and can adjust the current release of water against future releases.

Fending off the criticism of the legal team headed by Fali Nariman, the sources defended it, stating their advice on release was made so that the state succeeds when the main petition comes up for hearing before the court on October 18.

"It (main petition) is very important for the state. We have to succeed. The Supreme Court also asked Karnataka to live and let live. We cannot say no to it," the sources said. With demands from some quarters for changing the state counsel, sources said Nariman had been arguing the state's case for the last 32 years and was known for being "legally well equipped."

"Because of the circumstances, Nariman had proposed release of 10,000 cusecs for six days" but unfortunately, the Supreme Court increased it to 15,000 cusecs, they said.

As the opposition parties, BJP and JDS, sought to corner the government on the release, the sources said water had been released in the past also to fall in line with the Supreme Court order. "Deve Gowda, SM Krishna, BS Yeddyurappa and Jagadish Shettar have also released water to Tamil Nadu."

According to the sources, the state doesn't have to release 15,000 cusecs as such, pointing out that 5,000 to 6,000 cusecs flows downstream to Tamil Nadu naturally.

The sources maintained that Tamil Nadu is not facing the same distress as Karnataka as the flows at Biligundlu, the entry point in Tamil Nadu where the Central Water Gauge Centre is located, was 36 TMC ft of water.

The neighbouring state would also be benefited by North-east monsoon rainfall in the Cauvery delta and also has better ground water position than Karnataka, they said.

Asked why the two riparian states which are at loggerheads could not negotiate on the crisis, the sources said such attempts were made by Karnataka in the past but Tamil Nadu was not in its favour.

With protests in the politically sensitive Cauvery belt building pressure on the government, the sources said all efforts would be made to ensure drinking water to Bengaluru, Mysuru and other cities and villages fed by the river, besides protecting the interest of farmers on crops.