A man-made water crisis in Mumbai's backyard (video inside)

When water starts to flow out of the pipe, they pass the pipe down to their respective family members, mostly women, who fill up the blue drums. 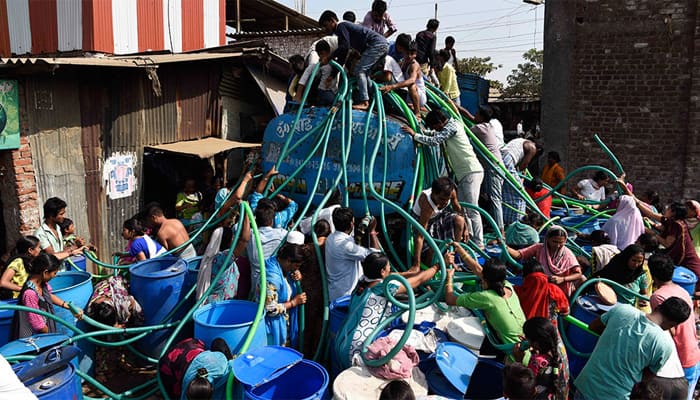 If Danny Boyle uses these shots and video clips in his film, half the country would perhaps be up in arms about how India was being misrepresented to the West. Mumbai and its satellite towns aren’t this poor; the lives of the people isn’t this bad; poverty is being lionised, they’d say.

But this isn’t fiction. It’s more in-human and stranger than fiction is and could be, because no one in their right mind would imagine a situation (and a reaction to a situation) like such.

Just 20 kilometres away from where the Mumbai city limit ends, in Thane district, lies Bhiwandi.

The city was once called the Manchester of the east, after it became a hub for the cloth industry post the mills in Mumbai shut down. It is still said to be one of the richest cities in the district and is also, at times, called the ‘Mother Godown’ owing to the several industries that it houses warehouses for, including the first warehouse that Amazon set-up after it set shop in India.

The city and its many migrant labourers have been, for decades, filling the coffers of cloth merchants and saving octroi taxes for industrialists across the country.

In the same city’s Nagaon area lies Gayatri Nagar; a stinking, dirty cluster of slums that could make any slum in Mumbai look like a plush, gated apartment complex.

The area has no toilets, people walk, live on, sleep next to piles and piles of garbage; garbage that they don’t even produce themselves. Garbage that they claim the civic administration dumps in their by lanes. In monsoons, sewage water seeps into their homes and along with it come rats, large insects and worms. But, that’s the least of their concerns.

To them, the biggest concern is the man-made drought in the area; a drought that has lasted for over three years and is likely to last indefinitely.

The area, dominated by Muslims, mainly from Uttar Pradesh, has pipelines with barely any water in them. The residents allege that the water flow in the pipeline is scarce and the flow is regulated by the local area corporator. “The area (Dutt Mandir), less than half a kilometre away from here, which falls under the same corporator, has ample water supply and other facilities. The area just a little ahead, which falls under another corporator, has enough water supply too. Why is there a problem here? The water shortage has been created by corporator Vijay Bhagat,” says Mohammad Thufail, a resident of the area.

Gayatri Nagar falls under Ward number 20, seat A, which is reserved for a woman candidate. As per official records, the corporator of the area is Pratiksha Vijay Bhagat.

Most residents of the area have the same opinion, a few of them voice it out loud, but a lot of them, mostly women, choose to walk away or not disclose their names fearing a more severe systemic backlash.

Mustaaq Ansari, another resident of the area, recollects all the time that the residents have visited the corporator’s office, only to be insulted and demeaned. “We’ve gone there with our issues. But each time we go, we are abused and treated badly. He (Vijay Bhagat) doesn’t care about us and deprives us, because he wins the seat on the votes that come from outside of Gayatri Nagar. Our religion works against us,” alleges Ansari, with the rest of the crowd gathered around him agreeing.

The residents in the area get their water supply from tankers, sent by administration twice a week. One tanker visits one small settlement every four days and when the tanker arrives is when the desperation for water truly comes to light.

The tanker driver informs the residents of his arrival a couple of hours in advance. It’s when every household starts preparing; children are summoned, reinforcements are called, blue drums and large green pipes, which are filled with water and sealed on both sides with plastic bottles on both sides, are lined up on the street.

When the tanker is seen pulling into the area, the young boys run behind and hop on the moving tanker. They climb on top and family members standing below throw the pipes at them. The boys remove the plastic bottle from one end and shove it into the tank and start blowing into the pipe from the other end.

When water starts to flow out of the pipe, they pass the pipe down to their respective family members, mostly women, who fill up the blue drums.

It’s a war out there. A war that lasts no more than four to five minutes; it’s all the time that the residents take to empty out all the water from the tanker. People push and shove and injure themselves and each other. There have been times when the pushing and shoving has led to women getting stripped off small pieces of jewellery and losing them.

There are also times when the desperation for water leads to clashes. “The fights have also ended up in police stations, but the police now know that it’s a routine affair and they resolve the matter verbally. No one bothers registering an FIR,” says a woman resident, who does not wish to be identified.

“There’s no guarantee of getting water when the tanker comes. I didn’t get any today. If children and men are agile and if they are at home when the tanker arrives, the chances are higher. Else, you go back with an empty drum and wait for four or five more days,” says another woman resident, also on conditions of anonymity.

Nana Kumbhar, the driver of one of the tankers, confirms that each lane gets water only once every four or five days.

As per the residents, their situation is unlikely to change. "The poor, especially from our community, have nowhere to go. There is no way out from this situation. Voting in another candidate will not help either. He’ll end up doing the same thing, because it’s convenient," says Mahindra Gupta, a resident.

His cynicism is not unfounded.

Read more stories from the ground.