The cause of the fire was not immediately known. 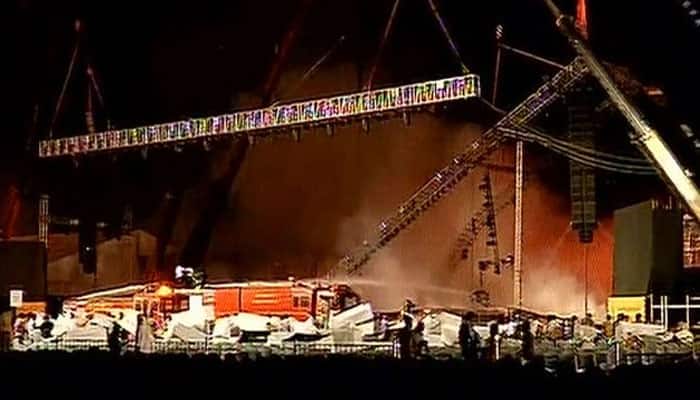 Mumbai: A huge fire on Sunday engulfed the main stage of the “Make in India Week” event here, as a cultural programme was being staged with a repertoire of Bollywood celebrities and senior government officials, including CM Devendra Fadnavis and Governor Ch. Vidyasagar Rao, in attendance.

The exact cause of the fire was not immediately known. However, a short circuit is suspected for the cause of the inferno.

The entire stage is reportedly gutted by the fire. The inferno broke out when the artists were performing on stage.

According to latest reports, the fire has been brought under control and no casualties have been reported so far.

There were scores of people, including VVIPs, watching the programme.

Strong winds have reportedly fanned the fire even as fire tenders rushed to the spot to douse the raging blaze.

At least 14 fire tenders and 10 water tankers were pressed into service.

Chief Minister Devendra Fadnavis stayed back at the site to oversee the evacuation of people, reports said. The programme has been called off.

Prime Minister Narendra Modi has spoken to CM Fadnavis to enquire about the incident, the PMO said.

“A comprehensive enquiry into the incident of fire will be conducted to ascertain the reason,” Fadnavis said, adding “No one is hurt and all the performers and the audience have been safely evacuated.”

Actor Vivek Oberoi, who was also present at the event, said “Mumbai police and fire brigade did a good job by evacuating people safely without any chaos.”

Other famous people who were present at the event included actors Amitabh Bachchan, Hema Malini, Aamir Khan and Katrina Kaif, Udhav Thakrey and his family, among others.

The Make in India Week, a mega business event, is being organised in Mumbai, which brought together industrialists from different parts of the country to discuss ways to make India the world's top manufacturing hub.

The Indian government wants the global and domestic companies to manufacture in the country in an effort to boost employment and bring down expensive imports.