Congress leader Pema Khandu will take oath as the Arunachal Pradesh Chief Minister on Sunday after the party managed to convince rebel legislators to come back into the fold and avoid a floor test. 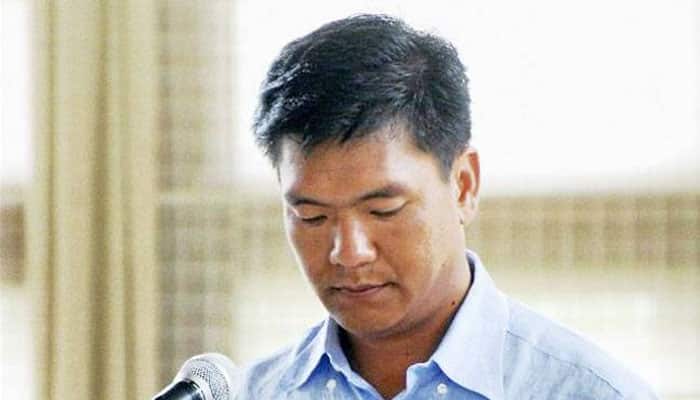 Itanagar: Congress leader Pema Khandu will take oath as the Arunachal Pradesh Chief Minister on Sunday after the party managed to convince rebel legislators to come back into the fold and avoid a floor test.

Khandu, 37, was elected as the leader of the Congress legislature party after Chief Minister Nabam Tuki resigned.

Khandu, a graduate from Delhi’s Hindu College, was one of the 21 rebel legislators who walked out of the party last year, plunging the Tuki administration in crisis.

He was inducted in the Tuki ministry in 2011 after his father died in a plane crash in Arunachal Pradesh. He was later given the portfolio of Tourism and Water Resource Development department. Khandu, however, resigned from the Tuki cabinet in 2014.

The proposal was supported by all the 44 legislators, including 15 Congress and 29 dissident Congress legislators who had joined the People's Party of Arunachal (PPA) in February.

"It's a big victory for the Congress in Arunachal Pradesh. The recent crisis was started by the BJP. However, all their evil designs have failed as the Congress has been able to put its house in order. I hope it will be big lesson for the BJP," Tuki said after leaving the Raj Bhavan.

After the return of the 30 PPA legislators to the Congress on Saturday, the strength of the Congress has become 45, which includes the Speaker, Nabam Rebia.

The Congress also said it has the support of two Independent legislators. The effective strength of the Arunachal assembly is 58 now.

The development comes as a setback for the BJP that had backed rebel leader Kalikho Pul, who walked out of the party in November with 20 other MLAs, and formed the government with support from the saffron party.

Downplaying the reports of former chief Minister Nabam Tuki's resignation, the BJP said in the wake of Pema Khandu's election as the CLP chief the Congress can't gloss over what happens subsequently and forget the cause of rebellion which took place within the party.

BJP spokesperson Nalin Kohli said, "With regard to democracy, the test and strength of democracy is the floor test and that the ultimate test, there can't be anything more than that. Where ever the numbers are the government will be formed with those numbers and that has to be respected."