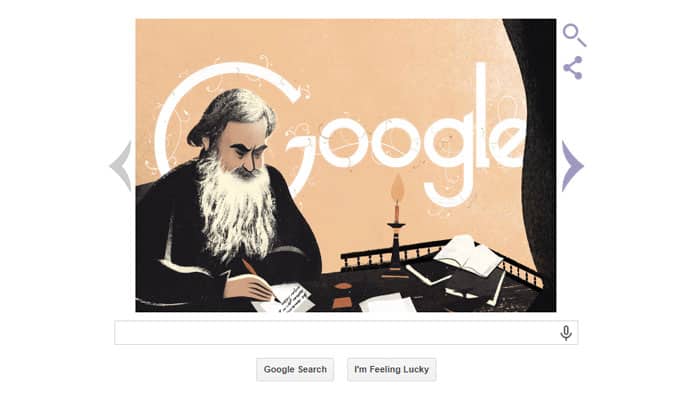 New Delhi: Today Google wishes the most renowned and celebrated Russian writer and philosopher, Leo Tolstoy with a captivating and animated doodle. Considered as the master of realistic fiction, he was born on September 9th, 1828 in Yasnaya Polyana, the family estate in the Tula region of Russia.

The doodle is presented in the format of a slideshow with images taken from his most famous and eminent novels which earned him world wide recognition.

The slideshow doodle begins with an image of a bearded Tolstoy busy writing at his desk by candlelight before presenting scenes from his most famous works, including War and Peace, Anna Karenina and The Death of Ivan Ilyich.

Tolstoy's epic masterpiece War and Peace is one of the most widely acclaimed novels in the world and considered as one of the most important works of literature.It tells of the events surrounding France’s 1812 invasion of Russia and documents life in the Tsarist society of the Napoleonic years through the eyes of five Russian upper class families.

His other masterpiece Anna Karenina is a sensational romantic tragedy which follows the life of Anna Karenina when she has a life-changing affair with the dashing Count Alexei Vronsky set in the 19th century Russian high society.

His other notable works include: The Resurrection,Master and Man, Family Happiness, A confession along with a variety of short stories, plays and essays. Tolstoy breathed his last on 20th November 1910 at age of 82 in Astapovo, Russian Empire.