Over 1,000 aspirants, including 62 from India, have been shortlisted for an ambitious private mission to send four men and women on a one-way trip to Mars in 2024. 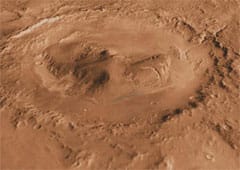 London: Over 1,000 aspirants, including 62 from India, have been shortlisted for an ambitious private mission to send four men and women on a one-way trip to Mars in 2024 to establish a permanent colony on the red planet.

The Netherlands-based non-profit organisation Mars One announced the selection of 1,058 candidates from the applicant pool of over 200,000 hoping to establish human life on Martian soil.
The applicants came from over 140 countries and more than 20,000 Indians had applied for the first round.

According to a website, of those who made the first cut, 297 are from the US. Canada is the second best represented country with 75 candidates, followed by India with 62 and Russia with 52.
Mars One co-founder Bas Lansdorp described the shortlisted candidates as "first tangible glimpse into what the new human settlement will truly look like."
"We`re extremely appreciative and impressed with the sheer number of people who submitted their applications. However, the challenge with 200,000 applicants is separating those who we feel are physically and mentally adept to become human ambassadors on Mars from those who are obviously taking the mission much less seriously," Lansdorp said.

All applicants were notified via e-mail of their application status. For those who were not selected in this round, there is still a chance they could reapply at a later date, which has not yet been determined, Mars One said.

"The next several selection phases in 2014 and 2015 will include rigorous simulations, many in team settings, with focus on testing the physical and emotional capabilities of our remaining candidates," Norbert Kraft, Chief Medical Officer of Mars One, said.
"We expect to begin understanding what is motivating our candidates to take this giant leap for humankind. This is where it really gets exciting for Mars One, our applicants, and the communities they`re a part of," said Kraft.

Mars One plans to establish a permanent human settlement on Mars. Crews of four will depart every two years, starting in 2024. The first unmanned mission will be launched in 2018, the organisation said on its website.