In this NASA image, the water-world Enceladus appears to sit atop Saturn's rings like a drop of dew upon a leaf. 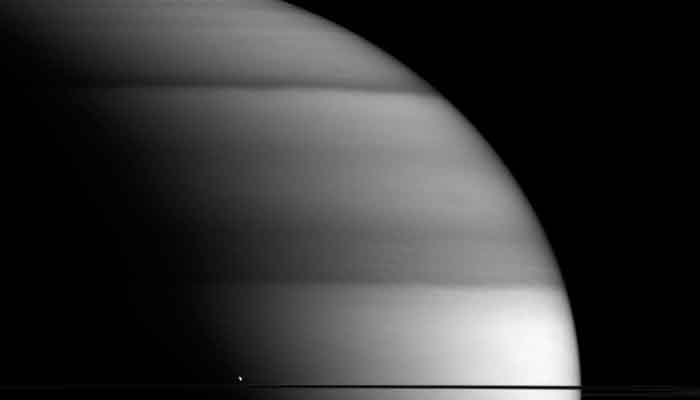 New Delhi: NASA has released yet another stunning view of Enceladus, the sixth-largest moon of Saturn, taken by the Cassini spacecraft.

In this NASA image, the water-world Enceladus appears to sit atop Saturn's rings like a drop of dew upon a leaf.

The image was obtained by Cassini spacecraft wide-angle camera at a distance of approximately 930,000 miles (1.5 million kilometers) from Saturn on May 25, 2015, using a spectral filter which preferentially admits wavelengths of near-infrared light centered at 728 nanometers.

Even though it appears like a tiny drop before the might of the giant Saturn, Enceladus reminds us that even small worlds hold mysteries and wonders to be explored, writes NASAin its official website.

The plume, which was discovered in Cassini images, is comprised mostly of water vapor and contain entrained dust particles, adds NASA.