Maulana Anwarul Haq, the head Imam of Jama Masjid in Bijnor, who offered Rs 51 lakh to behead Kamlesh Tiwari, has been arrested on charges of rape. 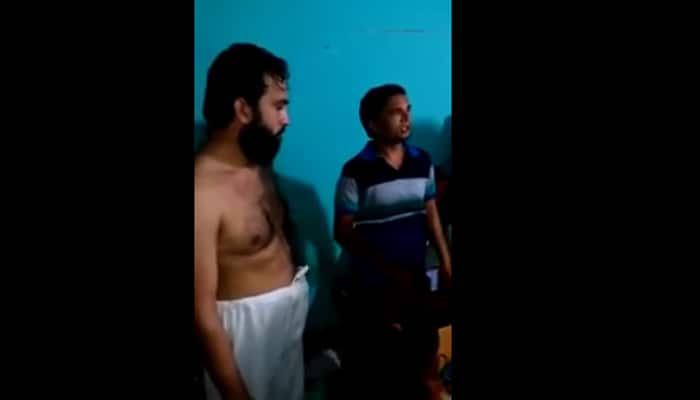 Lucknow: Maulana Anwarul Haq, the head Imam of Jama Masjid in Bijnor, who offered Rs 51 lakh to behead Kamlesh Tiwari, has been arrested on charges of rape.

Haq, who had courted huge controversy over Tiwari case, was held after husband and neighbours of the victim caught the Imam, who had been sexually assaulting the woman on pretext of curing her from evil spirits.

According to police, the husband of the alleged rape victim, had approached the head Imam of Jama Masjid to help cure his wife's illness.

Haq told him that his wife was possessed by evil spirits and should be taken to Kaliyar Sharif dargah in Haridwar to perform some rituals.

However, when they were staying in Haridwar, the Imam called the woman to his room on the pretext of performing rituals, but instead raped her.

After returning from the holy town, Haq again tried to rape the woman, when her husband was not at home.

The Imam was caught red-handed on August 19, when he along with his associate were at the alleged victim's place. But to his shocker, the husband arrived and sensing some mischief he called the neighbours, who in turn assaulted Haq.

The family didn't filed a police complaint. Later, the Imam started harassing them to give him the video clips of the August 19 day, which some locals had shot.

Unable to get the video clips, which would have exposed his true nature, Haq approached police and filed a complaint against the couple saying, they had robbed his wife's jewellery.

However, when the police called the rape survivor's husband, the whole story got unfolded.

Last year, Haq had shot to fame, after he had issued a fatwa to behead Kamlesh Tiwari.

Hindu Mahasabha leader Kamlesh Tiwari has been on the line of fire after his controversial statment that Prophet Muhammad was the first homosexual in the world.