Death of Aylan Kurdi: Distraught father of drowned boy pours his heart out

As the entire world wept over the haunting photograph of three-year-old Aylan Kurdi, the Syrian kid whose body was washed ashore, his heartbroken father fought tears to recount how his boat capsized after the driver jumped into water and escaped. 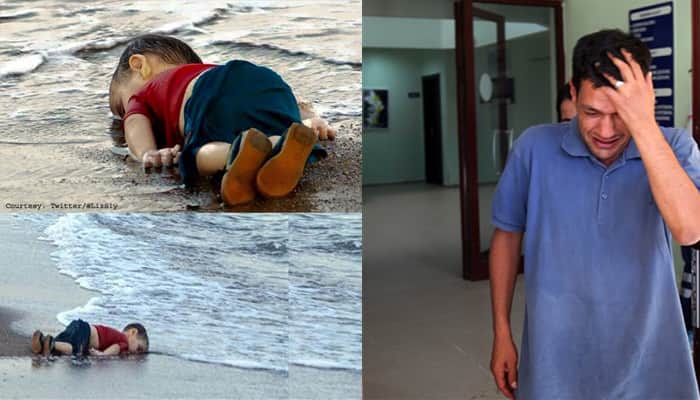 Ankara: As the entire world wept over the haunting photograph of three-year-old Aylan Kurdi, the Syrian kid whose body was washed ashore, his heartbroken father fought tears to recount how his boat capsized after the driver jumped into water and escaped.

Talking to the BBC in his first interview, the drowned boy's father Abdullah Kurdi, who hails from Syrian flashpoint town of Kobani, tried to steer the boat and save his family but 'they slipped from his hand and one by one they died'.

Abdullah Kurdi said how a smuggler brought them to the boat for crossing into Greece.

Kurdi said that just four-five minutes into the boat ride and the driver jumped into the water and escaped after sensing the danger as waves were very high.

Kurdi, along with his wife Rehan and sons, Aylan, 3, and Galip 5, were among 12 passengers on the boat.

Narrating the horrific details, Kurdi told the BBC, “Another high wave puhed the boat over, that is when it happened. I tried to catch my children and wife, but no hope. One by one they died.”

In what will break the heart of any parent, Kurdi said his children were the most beautiful children in the world.

“Is there anybody in the world for whom their child is not the most precious thing?" he added.

The netizens have since then shared the heartbreaking picture of Aylan umpteen number of times, and criticized the European nations for not doing enough to save the refugees.

Talking to the reporters, Aylan's father pleaded the world to pay attention to the “things that happened to us here, in the country where we took refuge to escape war in our homeland”.

In an robust but curt message to the world on the prevalent refugee crisis, Kurdi said, “Let this be the last".

Kurdi and his family lived in Kobani, Syria's border town with Turkey, that has since last year become a flashpoint for Kurds' battle against Islamic State as the extremists have continued to fight to recapture the strategic town.

The Islamic State's advance in Syria and Iraq foced many residents to flee, resulting in a severe migrant crisis as the refugees seek to reach European shores with many dying en route after risking the hazardous sea journey from Turkey to Greece.

During the four years of Syria's civil war, over 2 lakh have died while a whopping 11 million have been forced to flee.