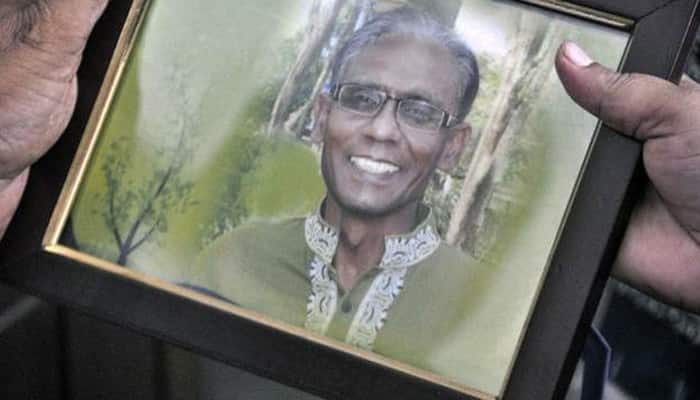 According to police, Professor Rezaul Karim Siddique, 58, was hacked from behind with machetes as he walked to the bus station from his home in the country`s northwestern city of Rajshahi, where he taught English at the city`s public university.

The attackers on a motorcycle used sharp weapons and fled the scene immediately. The assault bore the hallmarks of previous killings by Islamist militants of secular and atheist activists, the cops added.

"His neck was hacked at least three times and was 70-80 percent slit. By examining the nature of the attack, we suspect that it was carried out by extremist groups," Rajshahi Metropolitan Police commissioner Mohammad Shamsuddin had said, as per AFP.

Nahidul Islam, a deputy commissioner of police, had earlier informed that Siddique was involved in cultural programmes, including music, and set up a music school at Bagmara, a former bastion of an outlawed Islamist group, Jamayetul Mujahideen Bangladesh (JMB).

"The attack is similar to the ones carried out on (atheist) bloggers in the recent past," Islam had said, adding nobody had been arrested yet.

Homegrown Islamist militants have been blamed for a number of murders of secular bloggers and online activists since 2013, the most recent being in the capital Dhaka early this month.

Police further said that in each of the attacks unidentified assailants hacked the victim to death with machetes or cleavers.

Eight members of banned Islamist group Ansarullah Bangla Team, including a top cleric who is said to have founded the group, were convicted late last year for the murder of atheist blogger Ahmed Rajib Haider in February 2013.

Sakhawat Hossain, a fellow English professor from the university and a friend, had said the slain teacher played the tanpura, a musical instrument popular in South Asia, and wrote poems and short stories.

"He used to lead a cultural group called Komol Gandhar and edit a bi-annual literary magazine with the same name. But he never wrote or spoke against religion in public," Hossain had said.

Meanwhile, hundreds of students of Rajshahi University staged impromptu protests, marching on the campus in batches and shouting slogans, demanding the arrest of the killers.

Police said Siddique was the fourth professor from Rajshahi University to have been murdered. In February, a court handed down life sentences to two Islamist militants for the murder of another professor, Mohammad Yunus.

The recent killings have sparked outrage at home and abroad, with international rights groups demanding that the secular government protect freedom of speech in the Muslim-majority country.

Ansar al-Islam, a Bangladesh branch of al Qaeda in the Indian Subcontinent, this month claimed responsibility for the murder of 26-year-old Nazimuddin Samad, a law student who was killed on the streets of Dhaka, according to US monitoring group SITE.

Police, however, blamed the Ansarullah for the murder.

Bangladesh authorities have consistently denied that international Islamist networks such as al Qaeda or the Islamic State group, which recently claimed responsibility for the murders of minorities and foreigners, are active in the country.

A long-running political crisis in the majority Sunni Muslim but officially secular country has radicalised opponents of the government and analysts say Islamist extremists pose a growing danger.

Pakistani-Americans urge US to stop India from ''encouraging Baloch separatists''

DNA: Analysis of the relationship between Gandhi Family and former PM Narasimha Rao

Maharashtra Political Crisis: Floor test to be held in Maharashtra on June 30

Why Japanese were asked to switch off unnecessary lights but use air conditioning?

Taal Thok Ke: Uddhav faction is threatening rebels due to fear of defeat?