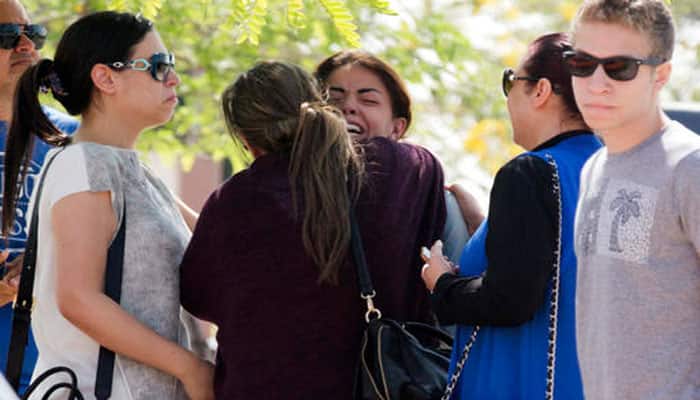 Paris: An EgyptAir flight from Paris to Cairo carrying 59 passengers and 10 crew members disappeared from the radar over eastern Mediterranean sea on Wednesday.

Flight MS804, operated by a Airbus A320, had departed Paris Charles de Gaulle Airport at 23:09 (CEST) and was scheduled to land at Cairo International went it off the radar – 16 kms into Egyptian airspace; 30-40 miles from the Egyptian coast.

The French and Egyptian foreign ministers exchanged "condolences" over an EgyptAir flight from Paris to Cairo that is feared to have gone down in the Mediterranean on Thursday, Egypt said.

Egypt's Prime Minister Sherif Ismail said that the search was underway to find the missing EgyptAir plane and it was too early to rule out any explanation for the incident, including terrorism.

"Search operations are ongoing at this time for the airplane in the area where it is believed to have lost contact," he told reporters at Cairo airport.

The Egyptian army denied it detected any "distress messages" from an EgyptAir flight, in a statement posted on its spokesman`s Facebook page.

A missing EgyptAir flight sent a distress message before vanishing from radar screens on Thursday that was detected by the military, the airline said in a statement.

Greek air traffic controllers spoke to the pilot over the island of Kea, in what was thought to be the last broadcast from the aircraft.  "The pilot did not mention any problems," Kostas Litzerakis, head of Greece`s civil aviation department told Reuters.

Greece said it had deployed air assets and a frigate to an area in the southern Mediterranean where an EgyptAir aircraft vanished from radar screens early on Thursday. A defence ministry source said authorities were also investigating an account from the captain of a merchant ship who reported a "flame in the sky" some 130 nautical miles south of the island of Karpathos.

"No theory can be ruled out on the cause of this disappearance," said Valls.

11.30 am: 30 Egyptians, 15 French among passengers on vanished flight: EgyptAir

The EgyptAir flight plane that vanished over the Mediterranean was carrying 30 Egyptian and 15 French passengers, as well as a Briton and a Canadian, the airline said.

An EgyptAir plane missing with 66 people on board probably crashed into the sea, officials from the airline and the Egyptian civil aviation said on Thursday.

Egypt`s state newspaper Ahram reported that there had been no distress call from the plane and that the last contact with the pilot was about 10 minutes before the aircraft disappeared.

11.00 am: EgyptAir plane that left Paris for Cairo ''did not land'' - French official

Referring to flight MS804 reported missing by the Egyptian airline, the French official, asking not to be identified by name, said: "It did not land. That is all we can say for the moment."

Officials at France`s foreign ministry were looking into the matter but had no immediate information to report when contacted.

B-52 crashes at Guam air base, no injuries reported