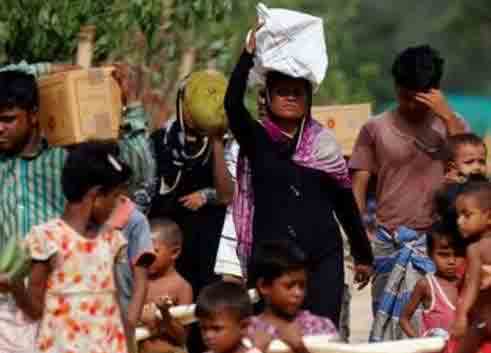 Aizawl: A total of 12 suspected Rohingyas from Bangladesh were arrested in Mizoram for entering the state without valid travel documents, a police officer said on Monday.

It is suspected that they were victims of human trafficking.

Khiangte said the arrested people had some mobile phones without sim cards in their possession.

Investigation is on to find out their identities.

The 12 people were found in the residence of a woman who claimed that her cousin who lives at Tahan in Myanmar had asked for her a favour to keep the 'guests' before they were taken to the neighbouring country.

In late April, eight Rohingya women were detained at India-Myanmar border Vairengte town for trying to enter Mizoram illegally and were pushed back.

They had claimed that they were from Kutupalong refugee camp at Sabulara in Bangladesh and were abducted on April 19 by a group of men who brought them to Mizoram by truck.

More than 700,000 Rohingya Muslims fled from Myanmar's Rakhine state to neighbouring Bangladesh since August 2017 after a military crackdown, triggering a massive refugee crisis.