Citizenship Bill's passage in LS marked by 'bandh' in Assam, other NE states

There were attempts to attack BJP offices in Dibrugarh, Lakhimpur and Golaghat, but those were foiled by the security forces. 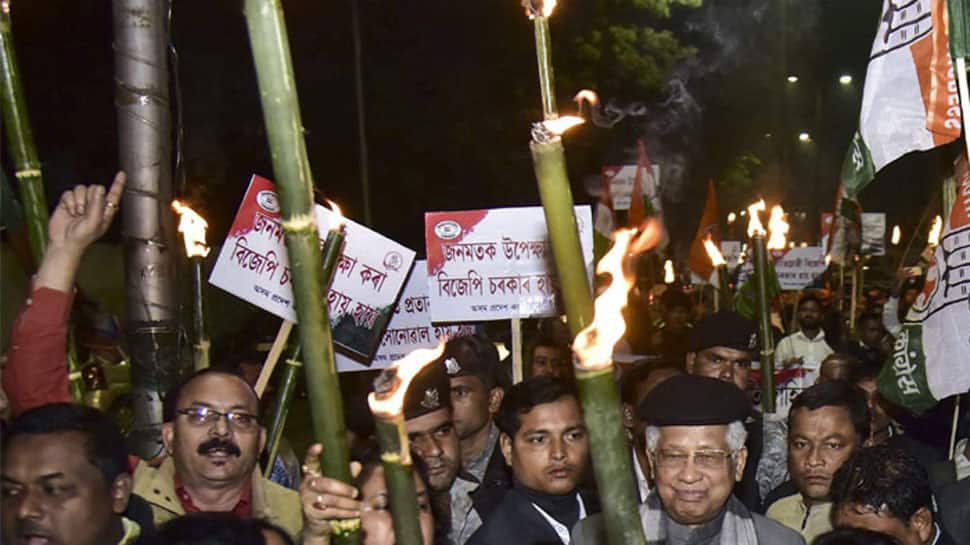 Guwahati: The passing of the controversial Citizenship Amendment Bill in the Lok Sabha on Tuesday was marked by a "bandh", which brought life to a standstill in Assam and had its spillover effect in the other north-eastern states.

The day saw a Bharatiya Janata Party (BJP) spokesperson quitting the party, moments after the bill was passed in the Lower House of Parliament, a former chief minister demanding the resignation of the BJP-led Assam government and a state minister describing the Asom Gana Parishad's (AGP) withdrawal from the government as a "historic blunder".

The protesters brought life to a standstill and vented their ire at the ruling BJP by gheraoing the houses of Chief Minister Sarbananda Sonowal, Power Minister Tapan Kumar Gogoi and attempting to attack the saffron party's offices in different parts of Assam during the 11-hour "bandh" called by the All Assam Students' Union (AASU).

The protesters stormed the chief minister's personal house in Dibrugarh and that of Gogoi's in Sonari during the bandh, which started at 5 am and ended at 4 pm, the police said.

Moments after the Citizenship (Amendment) Bill was passed in the Lok Sabha, BJP spokesperson Mehdi Alam Bora resigned from the party, saying the bill would harm the Assamese society and nullify the Assam Accord.

The issue brought the National Democratic Alliance (NDA) allies -- the BJP and the AGP -- face-to-face.

Former Assam chief minister and AGP leader Prafulla Kumar Mahanta demanded that the BJP government in the state resign and face a fresh election as the saffron party's pre-poll alliance with his party was snapped on Monday.

"The BJP-led government was formed in Assam on the basis of a pre-poll alliance with the AGP. As this alliance no longer exists, we demand that the government be dissolved," he said.

State minister Himanta Biswa Sarma said the the AGP had committed a "historic blunder" by not extending support to the Citizenship Amendment Bill.

Mahanta had committed the first blunder by signing the Assam Accord when he was the chief minister and his party made the second "historic blunder" by not extending support to the bill, Sarma, who holds the Finance and Health portfolios, said.

"I am proud of being an Assamese and the BJP is committed to protecting the interest of the indigenous population," the leader, who is regarded as the saffron party's face in the north-east, told reporters here.

"We have to do it on the basis of religion. On the basis of what else can we stop illegal immigration? It is well known that our land has been taken by Muslim migrants and now, we cannot allow anymore encroachment of our assets like the 'sattra' (monasteries) and Kaziranga.

"We are grateful to Prime Minister Narendra Modi for the bill and saving 18 Assembly seats in Assam from going into the hands of 'Jinnah' or the AIUDF's (All India United Democratic Front) Badruddin Ajmal," he said.

Assam BJP chief Ranjeet Kumar Dass claimed that the AGP leaving the NDA did not matter as the alliance would still get 11 of the 14 seats in the state in the upcoming Lok Sabha polls.

The AGP accused Sonowal of not "cooperating" on the bill and not giving due respect to the emotion and interests of the Assamese people.

The three AGP ministers -- Atul Bora (agriculture), Keshab Mahanta (water resources) and Phanibhushan Choudhury (food and civil supplies) will tender their resignation and complete the other related formalities on Wednesday.

The "bandh" was by and large peaceful with the police resorting to mild lathicharge to disperse the protesters at some places, Director General of Police Kuladhar Saikia said.

There were attempts to attack BJP offices in Dibrugarh, Lakhimpur and Golaghat, but those were foiled by the security forces.

Actor Naseeruddin Shah was among a host of air passengers stranded for hours at airports due to the non-availability of public transport.

Normal life came to a halt in the Brahmaputra valley and was partially hit in the Bengali-majority Barak valley, following a "north-east bandh" called separately by the North East Students' Organisation (NESO) and supported by over 100 organisations to protest against the Citizenship (Amendment) Bill, 2016.

The agitators blocked roads and national highways at various places, while picketers squatted on the railway tracks at various places in Guwahati and Dibrugarh district, but the movement of trains, including the Delhi-bound Rajdhani Express and the Kolkata-bound Kamrup Express, continued after the GRP removed them from the tracks, railway sources said.

There was no movement of vehicles, including goods-laden trucks, on national highways, following an economic blockade called by the Krishak Mukti Sangram Samiti (KMSS), sources said.

In Tripura, seven persons -- a Tripura State Rifles personnel and six TSF activists -- were injured at Madhabbari in West Tripura district, when the police and paramilitary personnel resorted to lathicharge and opened fire to disperse a group of students who had blocked the Assam-Agartala national highway.