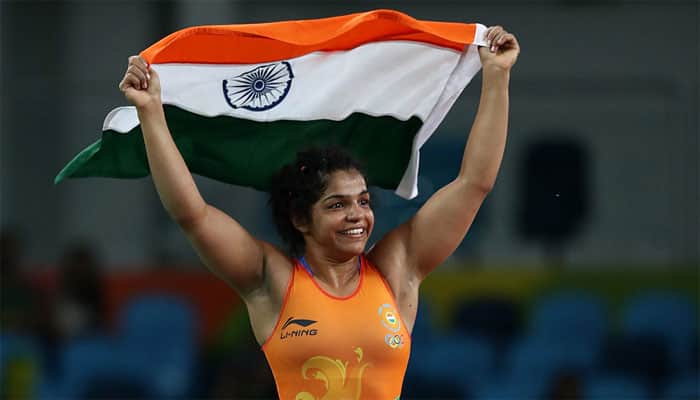 New Delhi: Ace wrestler Sakshi Malik said that she hopes shooting is included in the program for the 2022 Commonwealth Games in Birmingham. She said that she was in complete support of the shooters and said that it would indeed be demotivating if they weren`t allowed to compete at the Games.

"We are a team and so if anyone is excluded it does make a difference to us," said the 2016 Olympics bronze medallist on Tuesday. "In our contingent, the shooters bring a lot of medals and so it is very demotivating if they are not allowed to participate. So I am with them completely and I hope that shooting is included."

Indian Olympic Association president Narinder Batra wrote to Sports Minister Kiren Rijiju earlier this week seeking a meeting so as to explain the proposed boycott of the 2022 Commonwealth Games.

In June, it emerged that the Commonwealth Games Federation had decided to leave out shooting from its program for Birmingham 2022. The move is a blow to the Indian contingent who had won a total of 16 medals in shooting in the previous Games held in Gold Coast, Australia.

The IOA has since protested the move by first boycotting the CGF General Assembly in Rwanda and then withdrawing candidatures of two of its officials from the September elections in the country before proposing the boycott to Rijiju.

When asked if she would support the boycott if it were to happen, Sakshi, speaking on the sidelines of the announcement of her association with sportswear and equipment brand Asics, said: "For now I am not even thinking about that. I am hoping that the boycott doesn`t happen and shooting gets included."

Sakshi has more immediate concerns though, with the 2019 World Wrestling Championships starting on September 14.

The World Championship this year carries added significance in the way that it is part of the qualifiers for the Olympics with the top six wrestlers sealing their spot for Tokyo 2020. Sakshi hopes that she manages to finish within that bracket, something that she has never managed to do before.

"First of all, our sport is such that the smallest of moves can be the difference between victory and defeat. I don`t have any real targets of finishing first or second or qualifying, I just want to give my 100 percent in the match and, God willing, manage to qualify for the Olympics," said Sakshi.

"If I manage to qualify here then I will get a lot of time to prepare for the Olympics. That will be a big load off my shoulder," she said.

However, the 26-year-old is not worried about what happens if she does not manage to reach the top six of the World Championships.

"I had qualified for the Rio Olympics only through the final qualification tournament. And yet, I won a medal. So I would not be worried about any defeat that would happen because of a small mistake. But yes, qualifying in the World Championships itself gives me a lot of time to prepare," she said.

Sakshi plans to play a friendly tournament in Belarus as part of the preparation for the World Championships.

Apart from this, she said that the Wrestling Federation of India is planning to send the athletes to Kazakhstan a few weeks in advance so they get used to weather there.