An all-round show guided Bengal Warriors to a massive 48-17 win over UP Yoddha in an Pro Kabaddi League (PKL) contest here on Wednesday. It was also Bengal`s biggest win in the history of the league. 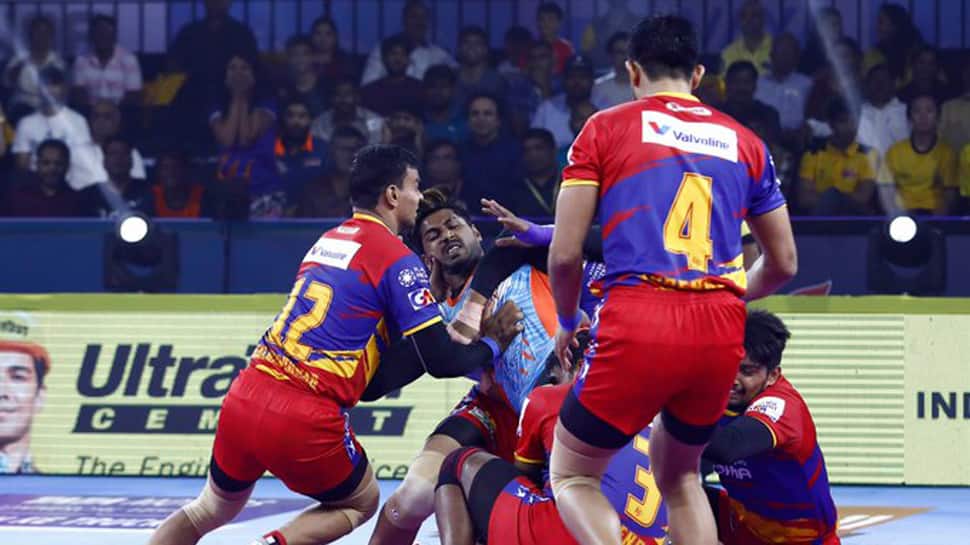 An all-round show guided Bengal Warriors to a massive 48-17 win over UP Yoddha in an Pro Kabaddi League (PKL) contest here on Wednesday. It was also Bengal`s biggest win in the history of the league.

UP`s defence had no answer to the raiding duo of Bengal as they could only score five tackle points. Monu Goyat scored six points but lacked support from the other end.

UP made a strong start and led 4-0 after three minutes. However, Bengal came back strongly as Maninder first made a two-point raid and their defence got their act together.

In the first 10 minutes, it was an evenly matched contest as both teams were level at 6-6.

Bengal soon shifted gears and went on a scoring spree. They first inflicted an all out in the 13th minute to lead 13-7 and their defence kept picking points at regular intervals.

Both the defence and raiders of UP had a quiet first half as they scored just three and four points respectively. At the end of the first half, Bengal led 17-9.

The second half began with the Bengal asserting further dominance as they inflicted another all out to lead 22-10.

Monu picked up a raid point in the 23rd minute as UPA trailed 11-25. Mohammed Nabibaksh produced an excellent super raid in the 24th minute to give Bengal a commanding 18-point lead as they led 30-12.

Bengal inflicted another all out to lead 33-13 after 25 minutes. UP were looking bereft of ideas to counter the strength and toughness that Warriors posed. Bengal inflicted fourth all out of the match in the 37th minute to assert further dominance and opened up a 28-point lead.

With less than a minute to go, Nabibaksh achieved a super 10 to lead his team to a massive victory.

PKL 2019, Telugu Titans vs Delhi Dabang: As it Happened