The 14 world titles holder had been gunning for four individual golds at the worlds but saw her run of three straight 400 titles ended by Australian Ariarne Titmus on Sunday. 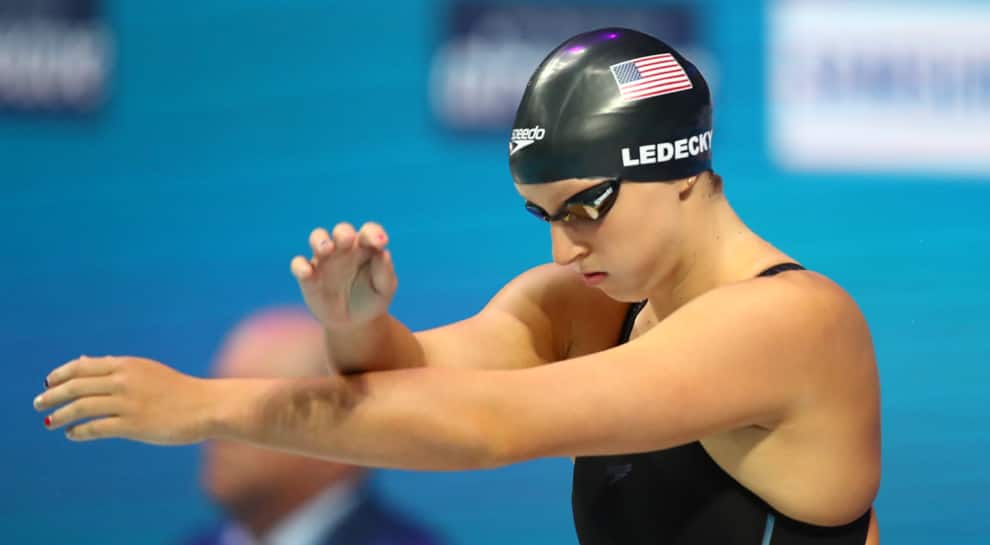 South Korea: Katie Ledecky`s withdrawal from the 200 and 1,500 metres freestyle put a huge dampener on the third day of the world swimming championships in Gwangju with a major question mark now hanging over the unwell American for the rest of the meet.

Ledecky had been gunning for four individual golds at the worlds but saw her run of three straight 400 titles ended by Australian Ariarne Titmus on Sunday, and USA Swimming have now said she would not defend her 1,500 crown later in the day.

While there is no news on whether the 22-year-old will defend her 800 metres event, the American may leave these championships without adding to her haul of 14 world titles.

In the Olympic champion`s absence, Sweden`s Sarah Sjostrom was quickest in the 200 heats in 1:55.14 with Titmus and world record holder Federica Pellegrini also moving through to the semis. Butterfly specialist Sjostrom likes the challenge of the 200 freestyle.

Titmus said she had lost three big threats with Ledecky, Australian Emma McKeon and Canada`s Taylor Ruck pulling out but winning gold would be no walk in the park.

"Three girls pulled out, probably my top three challenges, so you know it`s a little bit easier now but Pellegrini is still in there so it`s still a tough challenge," she added.

While Ledecky is feeling under the weather, Olympic breaststroke champion Adam Peaty sounds like he could run through brick walls. The Briton smashed the 100 world record on Sunday, won gold a day later, and on Tuesday qualified fastest for the 50 semi-finals in a time of 26.28.

"I made a little bit of mistake on my finish but tonight that`s going to pick up and hopefully get a little bit faster but I`m fairly strong - one of the strongest I`ve ever been and powerful," said Peaty.

There was a low-key return to the pool for 400 freestyle silver medallist Mack Horton, who on Sunday refused to share the podium with China`s Sun Yang over his doping record.

The Australian, whose protest drew death threats on social media, failed to qualify for the 800 final and was almost seven seconds behind Gregorio Paltrinieri, the fastest qualifier with 7:45.70. Horton sidestepped a question about the protest but teammate Jack McLoughlin said the death threats were "pretty bad".

"I wouldn`t wish that on my worst enemy so I think it`s just really bad for everyone and swimming and sport in general," said McLoughlin, who swam the third-fastest 800 in the heats.

Sun, who won the 800 title in 2015, scraped through to the final with the eighth-fastest time, 2.42 seconds behind Paltrinieri. Hungary`s Kristof Milak was fastest in the men`s 200 butterfly heats, the European champion touching in a time of 1:54.19, 0.37 ahead of Japan`s Daiya Seto.