Valtteri Bottas was second for Mercedes with five-times world champion Lewis Hamilton a distant third after tyre wear took its toll in a thrilling battle with the 21-year-old Monegasque. 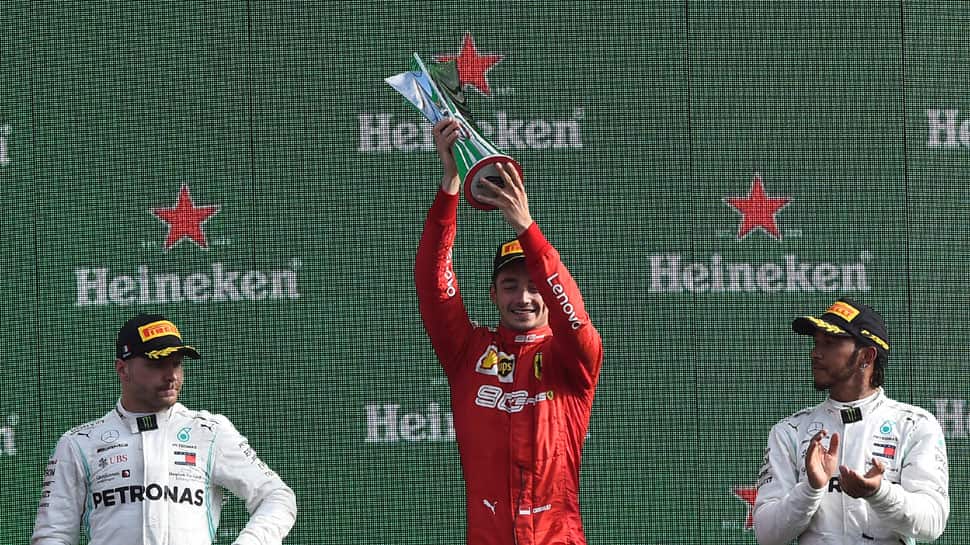 Charles Leclerc triggered a red wave of Ferrari celebration on Sunday by holding off a race-long Mercedes challenge to take the Italian Formula One team`s first home grand prix victory since 2010.

Valtteri Bottas was second for Mercedes with five-times world champion Lewis Hamilton a distant third after tyre wear took its toll in a thrilling battle with the 21-year-old Monegasque.

"What a race! I have never been so tired," gasped Leclerc as a sea of fans, starved of success at Monza since Fernando Alonso won in the red overalls, swept onto the pit straight to party below the overhanging podium with flags and flares.

"Winning here is just a dream," continued the Monegasque, switching to fluent Italian to address a crowd cheering a fitting win on the 90th anniversary of both Monza and Formula One`s most glamorous team.

"Last weekend (in Belgium) was my first victory, but the emotion of winning here is 10 times that," said Leclerc, in only his 14th race for Ferrari. "Thanks to everybody. I have no words."

Hamilton`s lead over his closest rival Bottas was cut to 62 points from 65, with the Briton limiting the damage by making a late pitstop for fresh tyres to set the fastest lap and gain an extra point.

"He did a great job, congratulations to Ferrari," said Hamilton. "A lot of pressure from both Valtteri and I. I did the best I could. Obviously following so closely for such a long time, the tyres eventually just went off the cliff."

"But nevertheless they were just quicker today, quicker in a straight line, so even if we did get close we couldn`t pass. So not our day but still strong points for the team," added the 34-year-old.

Leclerc`s German teammate Sebastian Vettel had an afternoon to forget, his race going from bad to worse at the one circuit where every Ferrari driver wants to impress.

While Leclerc led from pole position, the four-times champion spun off, dropped to last, served a 10 second stop/go penalty for a dangerous return to the track and was then lapped by his increasingly impressive teammate.

Stewards also handed him three penalty points, taking his 12-month tally to nine. If he gets three more in the next three races he will face a one-race ban.