From her battle against the IAAF gender testing rules to coming out as a lesbian in what is still a highly conservative country, Chand is used to making headlines but she hopes over the next year they will mainly be about her sporting prowess. 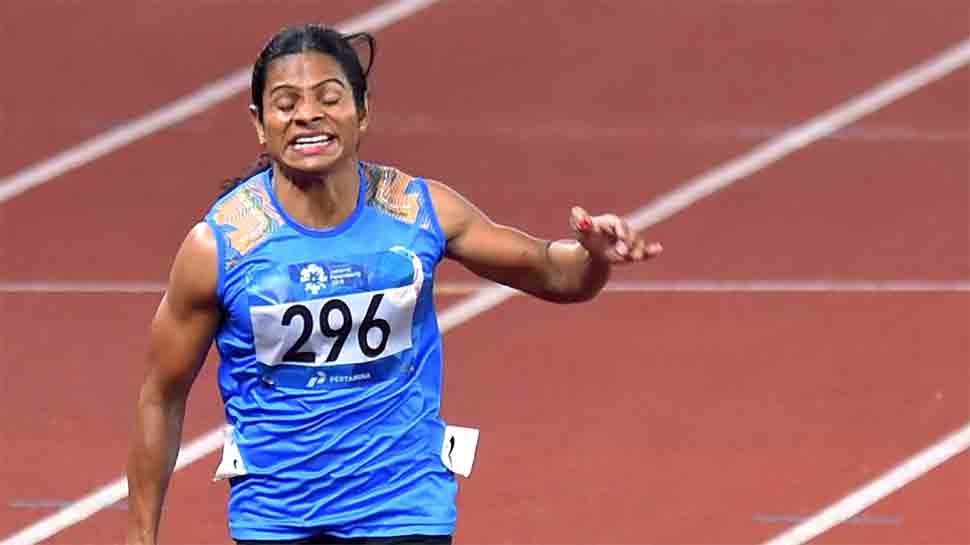 Dutee Chand, India`s first openly gay sports star, has fought many battles off the track in recent years but for the next 12 months, the sprinter is hoping to focus entirely on her running as she builds towards the Tokyo Olympics.

From her battle against the IAAF gender testing rules to coming out as a lesbian in what is still a highly conservative country, Chand is used to making headlines but she hopes over the next year they will mainly be about her sporting prowess.

India`s fastest woman, Chand holds the national record for the 100 metres with a time of 11.24 seconds and is a former Asian junior champion as well as Asian Games silver medallist in the blue riband event.

The jump from national or continental success to a global contender is a big one, however, and her season`s best time of 11.26 ranks her only joint 78th in the world. Still, with a year to go until Tokyo, the 23-year-old from Jaipur is confident she will make the qualifying mark of 11.15.

"I believe that hard work always pays off and I am working diligently to win more laurels for my country in the upcoming competitions," Chand told Reuters in an interview.

"My training schedule is pretty tough at the moment ... but I have seen that my timing has improved a lot compared to before. I am working really hard and am sure it will pay off. I feel I will qualify for the Olympics this year."

Given the events ahead of her maiden appearance at the Olympics in Rio in 2016, Chand could be forgiven for a little relief that qualifying times are all she has to worry about.

Her hyperandrogenism - a medical condition that naturally produces high testosterone levels in women - thrust her to the forefront of the debate over gender in athletics and she was barred from competition for a year in 2014.

It was Chand`s appeal to the Court of Arbitration for Sport that saw contentious International Association of Athletics Federations rules struck down in 2015, paving the way for hyperandrogenic athletes to compete in sprints.

Chand went on to become the first Indian woman since 1980 to compete in the 100m at the Olympics, although she was unable to progress beyond the heats in Brazil.

Comments aimed at her about a perceived lack of femininity by some in her homeland continued unabated, however, and in May she laid herself open to more abuse from social conservatives.

Chand caused a shockwave when she revealed she was dating a woman from her village in eastern Odisha state. She was praised for her courage but the revelation soured ties with her family.

Last year the Supreme Court scrapped a colonial-era ban on gay sex but while it no longer carries a punishment of up to 10 years in prison, same-sex relationships are still considered taboo by many in the country.

The revelation did not discourage sponsors - she signed a two-year deal with German sportswear company Puma this month - and Chand said her overwhelming feeling after coming out was one of relief.

"I don`t feel there has been any pressure on me since I have discussed my personal life openly," she added.

"In fact, I have received a lot of support and encouragement for speaking up about my choices. I felt pressured when I was in hiding. Not anymore."

"I am sure my achievements have made things easier for me but I also feel that people in our country have a greater acceptance level now and appreciate honesty over false identities."

In July, Chand clinched gold in the 100m sprint at a global meet when she clocked 11.32 seconds at the World University Games in Naples.

"The World University Games Gold medal was a great confidence booster for me. It highlighted my talents, my performance and dedication," she said.

"I received a lot of appreciation and support after this win and I look forward to winning more competitions such as these in the future and making my country proud. Gold medal always feels great. In fact, any appreciation or acknowledgement is a great morale booster. The more medals I win, the more my ambitions and confidence levels increase."