Vettel`s best effort of one minute 16.221 seconds on Friday morning was faster than anyone else went in Spain but Hamilton ended the final day only 0.003 slower on the same C5 tyres. 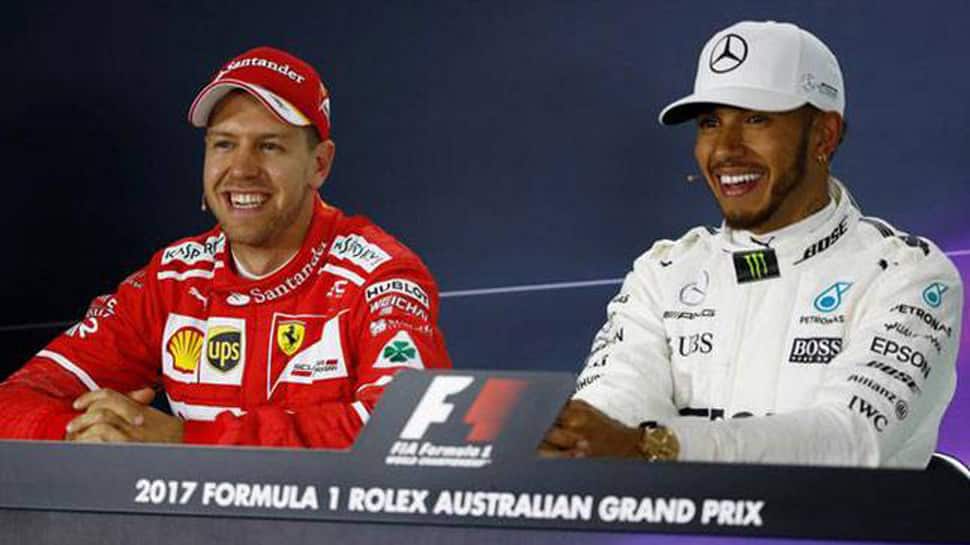 Sebastian Vettel wrapped up Formula One`s pre-season testing with the fastest lap for Ferrari on Friday but five-times world champion Lewis Hamilton kept Mercedes on the pace despite suggesting his rival had a half second advantage.

With teams packing up and heading home before the opening race in Australia on March 17, the evidence from eight days at Barcelona`s Circuit de Catulunya suggested there was very little in it between the two.

Vettel`s best effort of one minute 16.221 seconds on Friday morning was faster than anyone else went in Spain but Hamilton ended the final day only 0.003 slower on the same C5 tyres.

The Briton, who was actually faster than Ferrari on the second-softest C4 tyres, earlier told reporters he felt the Italians were much further ahead.

"I think the gap (to Ferrari) is potentially half a second, something like that," said Hamilton, who has won four of the last five championships in a V6 turbo hybrid era that Mercedes have dominated.

"Last year they arrived with a car working well but they have done even better this year. It`s OK. We don`t mind the challenge, it just means we have to work harder. I`m not worried or disappointed or anything."

His words were taken with a pinch of salt further down the pitlane.

"I believe that Mercedes will be very, very strong in Australia, and I think it would be completely wrong to think we are faster than them," Ferrari`s new team boss Mattia Binotto told reporters.

"I`m not expecting them to be behind us. I think they will be very, very close," added the Italian, who has taken over from Maurizio Arrivabene at the helm of a team chasing their first title in more than a decade.

Hamilton`s Finnish team-mate Valtteri Bottas was third fastest on Friday in 1:16.561 -- also on C5 rubber -- as Mercedes turned their focus to single lap pace after concentrating on longer runs.
Renault`s Nico Hulkenberg was fourth on the timesheets, ahead of Russian Daniil Kvyat in the Honda-powered Toro Rosso and McLaren`s Carlos Sainz.

Vettel`s day ended two hours early when he reported an electrical issue -- their third glitch in as many days -- after he had done 110 laps.

Binotto said the car needed to be faster and more reliable, with many issues still to be addressed and work to be done before Melbourne.

Hamilton and Bottas between them did 132 laps while Sainz completed 134.

A gearbox problem meant Red Bull`s Max Verstappen did a mere 29 laps after his mechanics had worked through the night to finish repairs to the car after team mate Pierre Gasly`s crash on Thursday.

"Unfortunately we were a bit limited with the parts we had so we couldn`t get out," said the 21-year-old Dutch driver.

Williams, who arrived late to testing due to problems in getting their car completed, were slowest with Poland`s Robert Kubica producing the best effort of 1:18.993 and completing 90 laps.

"It is a pity to end testing with a difficult day before we head to the first race. Out of the runs that we did, we managed to learn some things, but it hasn`t given me the level of confidence I would have liked ahead of Australia," he said.